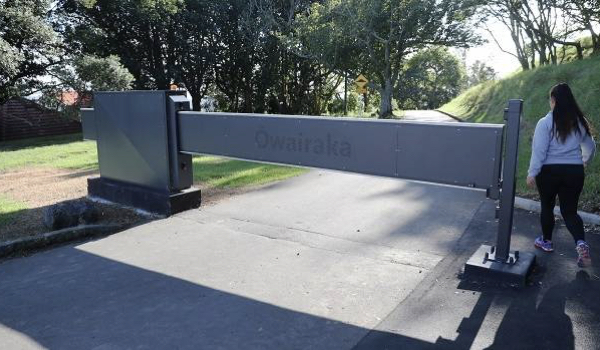 Users of Ōwairaka, the maunga in Auckland's Mt Albert, are objecting to the ‘military’ style gates designed to enforce the summit vehicle ban. Comments include words such as "hideous", "an atrocity", and “out of step with the place's natural beauty”.

People have taken to social media to mock the grey metal gates described as reminiscent of East European communist style. One wag wrote on Facebook: "Whilst I totally understand why people don't like 'em [the gates], I'm a fan of brutalist architecture, so I'm gettin' a great post war East Berlin feel from these, comrade."

Another replied: "When we walked through them while they were being erected I asked the construction guys if they'd need my passport or papers handed over before I crossed through... they took a moment to get it then cracked up laughing."

The body* responsible for the maunga said the new, "robust" style of gates were chosen after claiming people had damaged other summit-road barriers by trying to drive through them. Some have devised ingenious ways of lifting the gates without damaging them. Others have shifted rocks to gain access.

The closure of the maunga to vehicles has not been a popular move. A Herald Digipoll in January 2015 showed that while 58% of Aucklanders favoured the Mt Eden closure, only 28 % favoured extending closure to other cones. (Mt Eden had problems with scores of buses disgorging tourists on the landmark). Could these actions be a form of people protest?

Similar military style gates have been installed at Maungarei/Mt Wellington and at Maungakiekie/One Tree Hill.

*Auckland’s volcanic cones, including Ōwairaka/Mt Albert, are managed by the Tūpuna Maunga Authority, a co-governance entity comprised of equal iwi/ Auckland Council membership. According to the Authority, it has adopted a unique management structure with a Māori world view at its heart.