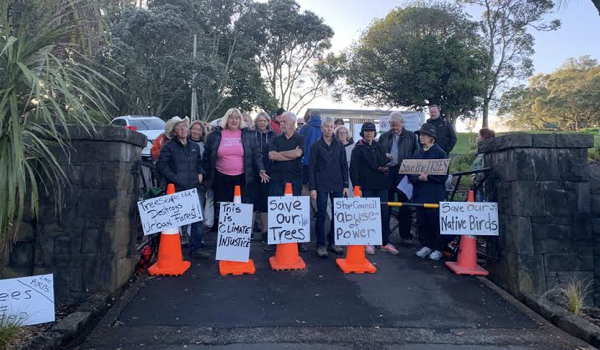 The Tūpuna Maunga Authority* (TMA), who control Auckland’s 14 volcanic cones (tūpuna maunga), is once again causing consternation amongst the people of Auckland - this time by wielding its powers in a destructive and seemingly vengeful way.

Waging utu on the exotics?

The TMA has plans to remove 2,000 exotic trees from the 14 maunga, and is currently in the process of implementing its decision.

Mt Wellington/Maungarei was first up, with the felling of 180 trees, followed 112 from Ōhuiarangi/Pigeon Mountain, and 152 from Māngere Mountain, upsetting local residents. The removal of mature healthy trees is part of what is called a ‘restoration’ plan.

“I do not support the proposal to remove these trees from Maungarei for the reasons stated in the Application. There is no arboricultural reason to do so and I do not believe that the visual effects of the proposal can be dismissed as minor. I do not consider that the tree removals are in the interest of all of Auckland’s communities and generations to come. The proposal places no value on the European historical and cultural links with the site, which is documented as predominantly the planting of the existing trees (both exotic and indigenous)." See Tree Advocates website for more on this.

According to the TMA operations manager Nick Turoa, the restoration plan [which includes the removal of exotic trees] is seen in the wider context of colonisation, land confiscations, and the alienation of Māori from their whenua and culture. (Ref: Hui held on Owairaka 28 November)

The TMA clearly stated in a presentation earlier this year - Co governance of the iconic Tūpuna Maunga of Tāmaki Makaurau – that the priority is cultural restoration not ecological restoration.

At the end of October, TMA advised that 345 mature, exotic trees were scheduled for removal from Ōwairaka/Mount Albert - starting from 11th November onwards. However, they did not count on the passion the local community has for their mountain, its trees and wildlife. Despite given very little warning about the impending tree cull, a grassroots group - Honour the Maunga – was set up, and with supporters from far and wide, has occupied the mountain 24/7. The goal is to save the trees by preventing tree-felling equipment from entering the site.

In response, much to the dismay of the group, the TMA has embarked upon a smear campaign full of half-truths and downright misrepresentations of the protest action. Honour the Maunga have countered with a question and answer webpage - Fact, fiction and spin – what can you believe?

This page includes an unabridged response from Chris Finlayson, former Minister for Treaty of Waitangi Negotiations, who was asked about the recent actions of the Maunga Authority which are concerning members of the community.

STOP PRESS - the TMA have been prevented from cutting down the trees for now, due to a judicial review. The hearing is to be held on 20th March 2020. However, this judicial review applies only to Ōwairaka/Mount Albert, and not the other 13 maunga.

*The Tūpuna Maunga o Tāmaki Makaurau Authority, established in 2014 as a result of a Treaty settlement, is a co-governance body comprised of equal representatives from local iwi and Auckland Council, together with Crown (non-voting) representation.

The authoritarian way the TMA imposes its will does not bode well for the wider community in areas affected by co-governance arrangements. While not yet publicly announced how the Pare Hauraki Treaty settlement co-governance regimes and natural resource partnerships will work in practise, the PARE HAURAKI COLLECTIVE REDRESS DEED appears to grant powers similar to that of the TMA over the maunga, waterways and catchment areas of the Coromandel Peninsula and into the Waikato region. As Aucklanders are discovering, the interests of other citizens in these areas will become secondary to the obligation of having regard to the spiritual, ancestral, cultural, customary and historical significance to iwi.

At no stage has the New Zealand public been given any say in these increasingly intrusive co-governance arrangements. There is no public debate, our approval is not sought. Nor is there any vigorous promotion of the public interest. To the contrary, it all happens out of the public eye, to be presented to us as a fait accompli.

Do you fancy co-governance arrangements over the Hauraki Gulf? No?

The Waitemata Harbour and the Hauraki Gulf are the jewels in the Crown of Auckland, much treasured by a great many. But there is the danger that the control of this area will go the same way as the maunga of Auckland. In response to a letter sent to the Minister for Treaty Negotiations, Andrew Little, the Minister confirmed that the Crown has made commitments to negotiate Treaty settlement redress over the Waitemata and Manukau Harbours and the Hauraki Gulf. This is also mentioned in the Pare Hauraki Redress Deed, which states that the Crown will seek arrangements involving the Iwi of Hauraki in the natural resource management of Tīkapa Moana (Hauraki Gulf) that are based on the Treaty of Waitangi, (see page 143).

Please don't wait to be invited to have a say on this issue, because you won't be asked. Instead, send your thoughts to: