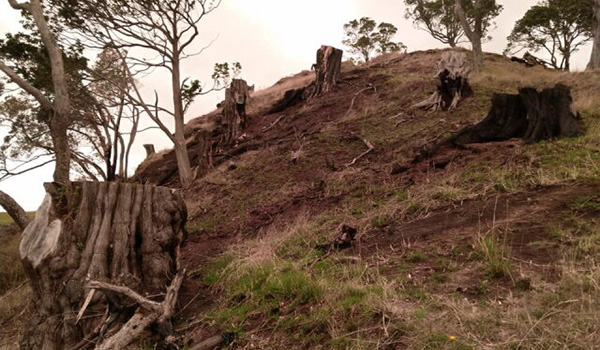 The Tūpuna Maunga Authority – a Treaty partnership body that equally comprises iwi and Auckland Council members - wants to rid Auckland’s volcanic cones (maunga) of all exotic trees - some 2500 in all.

The trees on one of the maunga - Mt Albert/Ōwairaka - are at the centre of an ongoing battle between local residents who want to save hundreds of the trees, and the TMA. However, as Anna Radford, founding member of Honour the Maunga (a group established to save the trees), writes in her commentary, ‘The politically-loaded issue of saving Auckland’s trees’:

“It didn’t take long to realise we had unwittingly walked into an intersection of complex and highly nuanced issues that drive to the core of our society”.

And that: “Trees rarely seem to win in this city but what makes me even sadder is how trying to save thousands of them has become such a deeply divisive and politically-loaded issue”.

A Court of Appeal judgement found that the TMA’s plan breached the Reserves Act and didn't carry out appropriate consultation with the public. The decision also concluded Auckland Council acted unlawfully by not publicly notifying the tree felling resource consent. As a result of this judicial decision, the TMA is now calling for public submissions on its plans to chop down all exotics, and some native trees, on several of Auckland’s maunga.

We are invited to have a say on this plan. Submissions must be received by 5pm, Saturday 8 October 222.

How to make a submission and to find the proposed Amendment to the Integrated Management Plan can be found on the TMA website: https://maunga.nz/plans-policies-and-procedures/

The direct link to the proposed amendments is here: https://maunga.nz/assets/Proposed-IMP-Amendment-2022.pdf

Here’s how to make a submission – it need only take 5 minutes!

All you need to do is send an email to [email protected] stating that you don’t want any trees to be cut down on any of the Maunga / volcanic cones, and then briefly explain why. That’s all it takes!

If you would like to go into more detail in your submission, then see the Honour the Maunga website for more information and some ideas about what you could include.