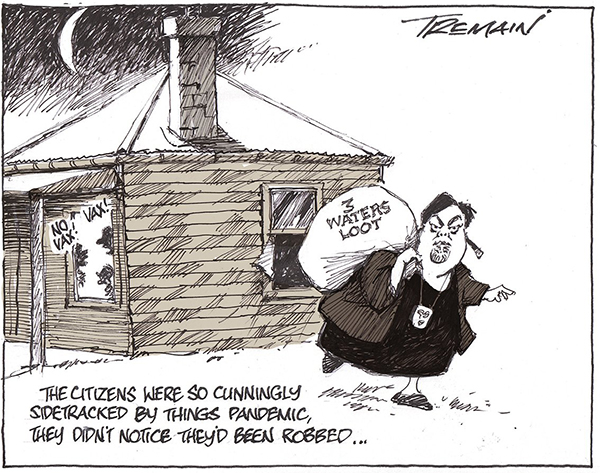 Incensed at the Government forcing through a plan for four mega entities to take over the country’s three waters infrastructure and service delivery - despite widespread opposition from 60 of the country’s 67 councils, and the promise from the government that their proposal was optional – three councils have banded together to file an application in the court against Minister of Local Government Nanaia Mahuta and Secretary for Internal Affairs Paul James.

Whangārei District Council (WDC) along with South Canterbury's Timaru District Council and Waimakariri District Council are seeking a legal judgment over what the word ownership means. WDC chief executive Rob Forlong said the government's now-mandated three waters plans appeared based on "ownership" that was very different from what was traditionally understood to be the meaning of this word.

The government had said councils would continue to "own" three waters assets. But that came with them having no control over the assets' governance or management, he said.

The legal proceedings have been filed to affirm the local government's rights and obligations as infrastructure asset owners.

The High Court declaration will have ramifications for all New Zealand councils. The outcome of the challenge has a pivotal function in "where to from here" in the national three waters restructure.

Meanwhile, 30 mayors and councils have sent a letter to Prime Minister Jacinda Ardern seeking a meeting over the mandated three waters restructure. Irrespective of the contents of the mayors’ letter, there are other significant questions about Three Waters that many would like answered. Prominent among these is whether iwi will have the right to extract royalties under the new regime. This question was asked of the Local Government Minister Nanaia Mahuta by RNZ’s Kathryn Ryan on November 2, and again on another occasion by Jordan Williams of the Taxpayers Union. Both times Mahuta simply avoided answering the question. Graham Adams, journalist, columnist, and reviewer writes in his commentary Ardern on the hook over Three Waters, published by the Democracy Project:

“The only conclusion to be drawn from Mahuta’s repeated evasiveness is that, yes, iwi will indeed receive royalties (which are, of course, an attribute of ownership that will be denied to everyone else)”.

Adams reports that Williams didn’t fare any better when he asked Mahuta why 50:50 co-governance with iwi was required over the water assets.

Mahuta described this as “an excellent question” before, once again, not answering the question.

Click HERE to listen to Jordan’s interview with Mahuta.

And click HERE for a summary of the Minister Mahuta podcast with the Taxpayers’ Union about Three Waters, by Matt Burgess (Insights newsletter).

Another bottom line for the Government is continued public ownership of water services. “Safeguards against future privatisation will be written into legislation to maintain ongoing ownership of the new entities by local authorities elected by communities”. (Department of Internal Affairs FAQ). However, Auckland’s Independent Māori Statutory Board did not get this memo. Chair David Taipari wants to see Māori not only have a stronger say in governance but also ownership of water assets. He says that around the country mana whenua are seeking co-governance and even co-ownership of infrastructure.

“We need to be part of the decision making in terms of the structures being put in place, then decisions over who are going to be in the authority and the directors and such, and the way Māori continue to be involved on an ongoing basis rather than one day a year so there is a hit (sic) of work to do,” Mr Taipari said. (Waatea News: IMSB eyes water body seats)

Taipari is not a lone voice. He is merely reflecting the narrative within organisations such as the Iwi Leaders’ Groups/Iwi Chairs Forum. The Māori Economic Development Taskforce, set up under the then Minister of Māori Affairs Pita Sharples in 2010, proposed that the next step in the Treaty of Waitangi partnership as one of iwi as co-shareholders in national infrastructure:

“Perhaps in roads, water services, health centres and other strategic infrastructure. It is not impossible to imagine Iwi as cornerstone shareholders in State-Owned Enterprises – making them State-Iwi Owned Enterprises”. IWI Infrastructure and Investment May 2010

THE GOVERNMENT’S SOP TO QUELL THE OUTRAGE

In response to the vociferous opposition to the proposed reforms from the vast majority of councils and many members of the public, the Local Government Minister Nanaia Mahuta has established a working group to recommend strengthened governance and accountability arrangements for the Three Waters Reform Programme.

The narrow terms of reference make it clear the government is still determined to plough ahead with its proposals, only looking to tweak the “proposed representation, governance and accountability arrangements for the new entities.”

Establishing democratic accountability and local influence would be some progress towards a more democratic model, but to do so the Government would need to reject one of its bottom-line objectives, which requires the governance framework of the Water Services Entities (WSE) to be set up as Treaty partnerships and to ensure that iwi from within the geographic area covered by a WSE have joint oversight of the WSE together with the relevant local authorities, (clause 17 Terms of Reference).

This partnership model is reflected in the make-up of the working group. The members are:

The Working Group will report back in March 2022, which according to Mahuta, ensures there is time for the advice and recommendations to inform the final entity design.

The legislation for Three Waters is set to be introduced to Parliament in early December. The bill’s first reading is expected to take place this same month and will then be referred to a select committee - with public consultation invited in early 2022 through the select committee process.

While the Select Committee process will likely be a ‘going through the motions’ exercise for the government, it is still very important that opponents express their opposition, otherwise the Government will take our silence as approval. Please lookout for the opportunity to make a submission when the bill goes to the Select Committee.

Other ways you can help: