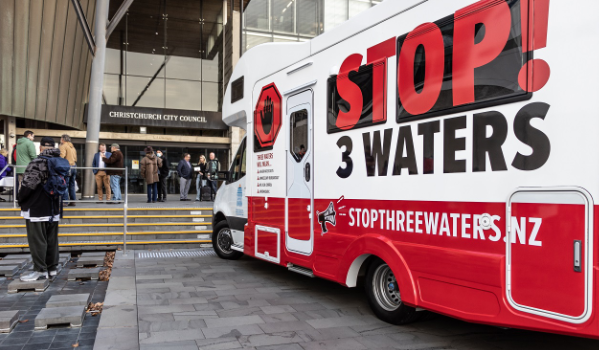 Christchurch was the first of 39 stops in a nationwide roadshow run by the Taxpayers’ Union to oppose the Government’s Three Waters reform. Executive director Jordan Williams said the tour was being held to hear and highlight the concerns of ratepayers and local councils opposed to the “undemocratic three waters asset grab.”

“We’ll be spreading the message directly within the local communities whose water assets Nanaia Mahuta is trying to remove from local control to put into ‘co-governed’ entities”.

The intention of the roadshow is to highlight just how unpopular these proposals are, put pressure on those few councils still holding out from resisting the Government, and pile the pressure onto Labour’s provincial MPs who are the key to overruling Mahuta’s undemocratic agenda.

The full itinerary of the tour is available HERE. This page, and the Taxpayers’ Union Facebook page, will be updated with exact times and locations for each stop as the roadshow progresses.

Go along to show your support - meet the team and pick up a stack of petition pamphlets to deliver to friends and neighbours.

If you can help organise an event in your town, or spread the word to community and civic leaders who have committed to Stop Three Waters and ask them to attend, drop TU a line at  [email protected]

Other ways to help spread the word:

If you add your name to the Stop Three Waters petition, TU will email you when they come to your town/city.