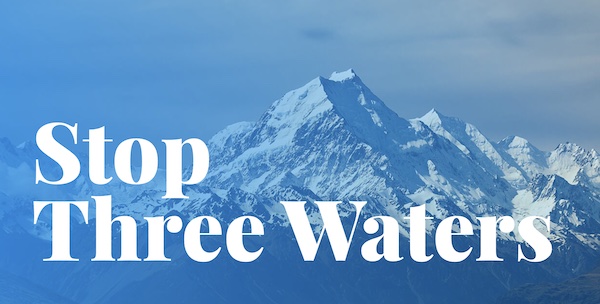 You may not have heard of the Water Users’ Group. This is a group of concerned citizens who are taking legal action against the Labour Government’s plan "giving some Māori the effective control of more than a hundred billion dollars of ratepayer funded three waters assets". A link to the Group's website is here: www.waterusers.org.nz

A legal team acting for the Group has filed a statement of claim in the High Court against Minister of Local Government Nanaia Mahuta and David Parker as the Attorney-General, alleging errors of law in Mahuta’s Cabinet papers that outline the Three Waters scheme.

In their Statement of Claim, the Water Users’ Group is asking the Court for –

Stephen Franks of Franks Ogilvie, the firm leading this action, spoke to the Taxpayer’s Union on this recently. You can listen to the podcast here: ​​

We suggest you read the Statement of Claim and listen to the podcast above, as they have some interesting points about the “Treaty principles” that are yet to be tested in law.

Subsequent to this the Crown filed a Statement of Defence. So what does this say?

Essentially the Crown has tried to downplay the Minister’s co-governance proposals and vision for the role of Māori in the Three Waters scheme. The Crown says the purpose of the Three Waters scheme is “to provide safe, reliable and efficient water services”. The mechanisms to recognise rights and interests of Māori are just an “element” of the reforms, but not “fundamental”. They acknowledge a guiding principle of ensuring the Treaty and Te Mana o Te Wai are referenced “appropriately”.

“Crown Law could have chosen to run this as a principled examination of troubling legal questions, an opportunity to get guidance from the Courts on just what the judges intended when they created the partnership metaphor and set Treaty litigation on its way. But the Statement of Defence carefully avoids engaging on the key issues.” said lead lawyer Stephen Franks.

To add to the Crown’s apparent unwillingness to fully engage, the Statement of Defence says the claim that the three waters infrastructure was established after 6 February 1840 is “too vague and not explicit enough for them to plead to”. This argument is used to answer the claim that ratepayers provided the ‘equity’ component of the Three Waters assets. Additionally, they are actively avoiding statements that would define three waters, possibly because it could highlight the fact that three waters is about the water delivery infrastructure, not bodies of water.

The Government also continues to deny that ownership of three waters will be removed from local authorities. The Water Users’ Group case treats ownership conventionally as a bundle of rights. As Gary Judd QC writes in his commentary

The group is prepared to fight this all the way to the Supreme Court, which may be the only way for this to be resolved.

We applaud the Water Users’ Group for doing this important work.

We encourage you to sign up to receive updates from the Water Users’ Group, you can do that on their website: www.waterusers.org.nz