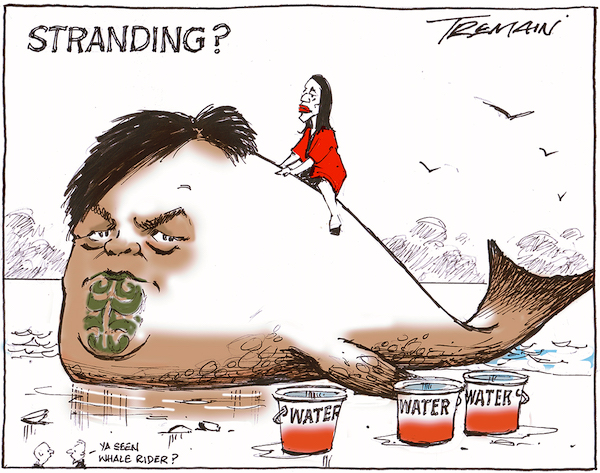 There is strong level of opposition across the country to the Government’s proposed Three Waters service delivery programme. Comments from councillors show very serious concerns. In some quarters there appears to be a suspicion that the Government is not being completely open about everything it is seeking to achieve.

While there is universal support for “better water for everyone”, a lack of clarity and the manner and speed with which the process is being conducted suggests a hidden agenda. Apprehension about the programme has not been helped by the Government drip-feeding information on their plans. Councils are complaining about the lack of detail currently on the table - the Government has proposed a broad outline of a post-reform structure, but there is no fully formed proposal that would enable councils to meaningfully weigh up the pros and cons of the reforms.

The figures don’t stack up

Councils and the public are questioning the logic of the Department of Internal Affairs (DIA) reports, including that the assumptions relied upon in support of the reforms in many respects lack credibility. Councillors are complaining of errors in the data, false and misleading information, mixed messaging, information gaps, and far too many unanswered questions. Typical comments include that of Matamata-Piako mayor Ash Tanner who reportedly said that the council did not have trust or confidence in the Government's figures, and wanted "some credible facts and figures, something that adds up.”

Several councils have commissioned their own independent reports as they are unclear about the benefits for their communities based on the information they have received from the Government.

Whangārei Mayor Sheryl Mai: “the Government's plan to amalgamate the country's drinking water, wastewater and stormwater assets is based in 'deeply flawed ideology’.

As part of the decision-making process, Whangarei District Council commissioned a report from global economic consultants Castalia on the Three Waters Reform proposals. The Castalia report discredits the underlying premise of the Government’s case for water reform. It debunks Government claims that amalgamating the water services into four big regional authorities would save money. These findings have confirmed the Council's decision to provisionally opt-out of the reforms at this point.

The lack of democratic accountability in the proposed model is most certainly a major issue.

It is unclear how communities would have a voice in, let alone influence over, decisions in the proposed system. As there is no guarantee of representation on the new entity, Councils are not convinced that their local water infrastructure would remain priority. Timaru District mayor Nigel Bowen: “The major city councils such as Christchurch and Dunedin, who represent the biggest number of people would understandably want a guaranteed say, and I’m concerned that smaller councils such as ours could go for years never having anyone representing them”.

This lack of accountability to local communities is greatly exacerbated by the unfairness of the 50-50 partnership model. Fifty per cent representation would be accountable to the ratepayers or users - the people who have contributed 100%. The other 50% would not be accountable to this group. Instead "they're going to be accountable under a kaupapa Māori model", thereby giving 16% of the population a grossly disproportionate influence over our national water assets.

The Government has always said the water entities would be publicly owned, but it has not revealed how that public ownership would work. It says councils will continue to own the entities, but ownership will not be the equivalent of a shareholding, meaning they’ll have “no financial recognition of ownership”. However, Gary Judd QC points out in his article Ideological government indulging sectional political constituency “As the proposal deprives local authorities of all the rights of ownership, this “ownership” is a fiction. It is “spin” on a grand scale. Listing in the legislation does not confer ownership if it does not confer ownership rights”.

Overwhelming opposition to the plan

Even the mayors who have in the past supported the reform programme are finding out their communities are telling them differently. According to the mayor of the Grey District, one of the councils which has been actively engaging with the community about Three Waters, public feedback is 98% against. Over at Gisborne Council, feedback shows 93% of the responders to a survey do not agree with the Government’s model. And at Waimakarirri, a recent engagement with ratepayers disclosed over 95% of those responding wanted the council to opt-out. “We had an amazing response of 3844 respondents, almost 5 times the response of our last consultation, a controversial sports stadium about 4 years ago!”

Has the suspected hidden agenda been revealed in Auckland?

While Auckland Council has not been actively engaging with the community about the Three Waters plan, it has been consulting with the local boards, the Independent Māori Statutory Board (IMSB) and the Mana Whenua Kaitiaki Forum. During a Governing Body meeting on 23rd September Mayor Goff revealed that the Kaitaiki Forum and the IMSB are unhappy with the co-governance model, instead “would like co-ownership and co-governance of the assets”. Click HERE for a link to the video recording of the meeting. The discussion on Three Waters begins at 1.21.07

Auckland Council plans to hold a formal consultation process with the community once they have received the final proposal from the Government. They will be seeking submissions and commissioning a representative survey based on region, gender, and ethnicity, usually of just 4,000 people - a drop in the ocean considering the 1.6m citizens of Auckland. The mayor is not ruling out a referendum, saying this is up to the Governing Body to decide.

The next step – will Mahuta’s jackboots make another appearance?

After consultation with the councils ends on 1 October Nanaia Mahuta will be presenting advice to Cabinet about the next steps. Alarmingly, the minister is not ruling out forcing the councils into the reforms, thereby riding roughshod over communities, without proper consultation or compensation for seizing local community assets.

A Call to Action!

Citizen groups are beginning to pop up around the country, demanding a say on the proposed reforms, like ‘Our District Our Water’ in Timaru. Co-founder Janya Lobb said at a public forum: “The Government needs to back off and give us time to consult.” And the Nelson Citizen’s Alliance, who presented a petition to the council demanding that Nelson City Council makes no commitment to transfer the city’s water assets valued at $685 million without the consent of the ratepayers. This group stormed the Nelson City Council building in protest, demanding that the council opt-out, or a least hold a binding referendum on the issue. See media report HERE.

If you too share our concerns about the Government’s proposed three water agenda, please join the fight. See below some suggestions on how to become involved:

Go back to the October 2021 newsletter