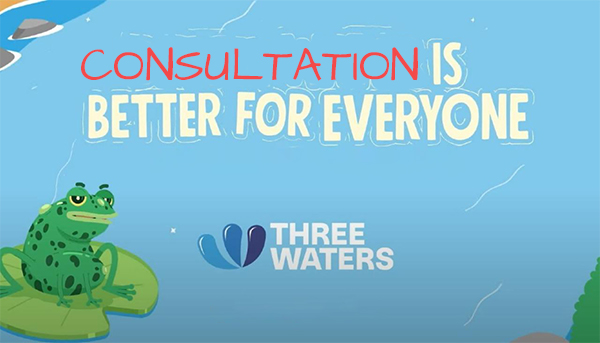 The most comprehensive polling to date on the Government’s Three Water reforms reveals the overwhelming majority of New Zealanders believe the Government should consult with them over the highly contentious policy proposal.

Its release follows more than a dozen mayors representing 23 councils from around New Zealand taking their concerns to Parliament yesterday. While Local Government Minister Nanaia Mahuta claims she has consulted, nearly three-quarters of the public believe she hasn’t, and the issue looks set to affect voting at the next election.

The Government recently announced that the introduction of legislation to amalgamate the water services of 67 councils into four regional water entitles will now be delayed until next year. Advocacy group, Democracy Action, says the Government should use this time to consult with the public – as that’s what New Zealanders are demanding.

When comparing voting intentions before and after respondents completed Horizon’s Three Waters survey, the current government proposal could result in the Labour Party losing 2.6% of its party vote. What’s more, the votes for all other parties currently in Parliament would rise – National’s by the most, at 4.7%.

“This survey confirms that even Labour supporters are not happy with the Government running roughshod over democracy and refusing to engage in public consultation. It is increasingly clear that if Labour goes ahead with its Three Waters reforms it will not only lose support but possibly the next election. That’s how angry people are,” says Lee Short, spokesperson for Democracy Action.

Horizon’s survey reveals that opposition to the proposed policy to transfer drinking, waste and stormwater water delivery assets and services from local authorities to four multi-regional entities runs twice as high (48%) than support (24%), while 28% are either neutral or unsure.

Mr Short says despite the Government’s multi-million-dollar Three Waters advertising campaign, Kiwis are not convinced. Most firmly believe that if local water assets are transferred to four new entities, local control and accountability will be lost.

Opposition to the proposed reforms, including from 60 out of 67 councils, remains vociferous. Democracy Action believes Nanaia Mahuta’s attempts to appease the public have fallen well short.

“Her response to the outrage has not been to stop and listen to New Zealanders, but to establish a working group, with narrow terms of reference, to discuss governance and accountability arrangements. It’s abundantly clear this Government remains determined to plough ahead regardless of what the majority of Kiwis actually want,” he says.

Local referenda on the final policy choices are supported by nearly two-thirds of New Zealanders. Responding to the question ‘Do you think there should be a referendum for each community on the final Three Waters reform proposal’, 63% said yes, 23% said no, and 14% were not sure. Notably, 54% of those who voted Labour in 2020 said yes to referenda.

On the question of ‘Do you think the Government should consult you about your views of the Three Waters reforms’, 71% said yes, 13% said no, and 16% were not sure. Notably, it was those Kiwis living outside our large cities who are more likely to want consultation, (74% compared to 68% for those in large cities). Of those who voted Labour in 2020, 62% thought the Government should consult the public.

The survey shows most Kiwis care who owns the three water assets (64%) and who provides water services (58%) in their own council areas.

“Proponents try to argue that Kiwis don’t mind who owns and manages our water assets. This survey, however, confirms a strong majority do care, particularly older New Zealanders who have seen generations of ratepayers build and fund these vital community assets. They don’t want to see all that local work and investment squandered by a government obsessed with centralisation,” Mr Short says.

The enabling legislation for Three Waters is expected to be introduced into Parliament early next year. The bill will then have its first reading before being referred to a select committee.

Democracy Action is encouraging New Zealanders to have their say, via select committee submissions. As well, many councils are conducting their own consultation, with Auckland Council seeking feedback up until 19 December.

“Twice as many Kiwis oppose Three Waters than support it. Nearly three-quarters want government consultation, while nearly two-thirds want a local referendum – neither of which will happen. However, we must remember that Three Waters is not yet set in stone. Kiwis must continue fighting, otherwise the public’s silence will be interpreted as consent. Thankfully, we now have more time to stop this hugely unpopular asset grab,” says Mr Short.

“The Government’s plan to push through these reforms is a far cry from its 2020 election promise, to ‘ensure the majority decisions about local democracy involve full participation of the local population from the outset’. The Three Waters policy must be challenged,” he says.

The Horizon Research online survey of 1,159 people aged 18+ was conducted between 5 and 12 November 2021. The total sample is weighted on age, gender, ethnicity, employment status, level of education and region to match the Statistics New Zealand figures for the 18+ New Zealand census. At a 95% confidence level, the survey has a maximum margin of error of ± 2.9% overall.

See below for a copy of the poll results.