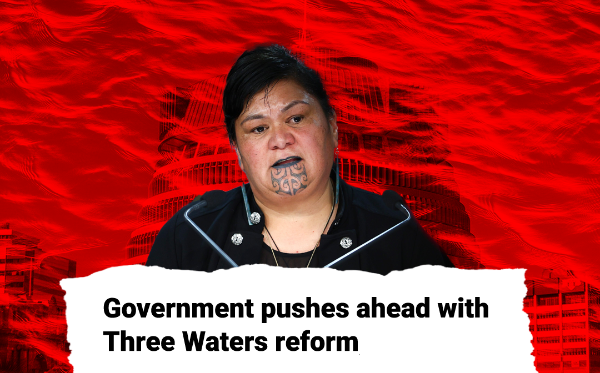 The controversial Three Waters legislation is one step closer - the Water Services Entities Bill was introduced to the House last week. Local Government Minister Nanaia Mahuta said it was the first of several pieces of legislation concerning the proposed water entities.

The proposed four entities will be governed and managed in accordance with “the principles of the Treaty, Te Mana o te Wai, and mātauranga Māori, tikanga Māori, kaitiakitanga, and te ao Māori”, according to the various Cabinet papers on the subject. (John Bishop, Three Waters is still a shameless asset grab)

In response to the overwhelming opposition from councils and the public, Mahuta appointed a working group to investigate possible solutions. She adopted most of their recommendations - the key changes relate to themes of ownership, governance and accountability, Te Mana o te Wai, strengthening the application of Te Tiriti o Waitangi and other matters relating to iwi/Māori rights and interests. The most controversial aspect of the reforms - co-governance - remains.

And not only does this remain, but a new layer of bureaucracy is to be added - regional advisory panels - again co-governed bodies which must include an equal number of territorial authority members and iwi reps. This is despite Nanaia Muhuta's promise in April that "Joint strategic oversight with local government and iwi Māori will only happen at the regional representative group level..." 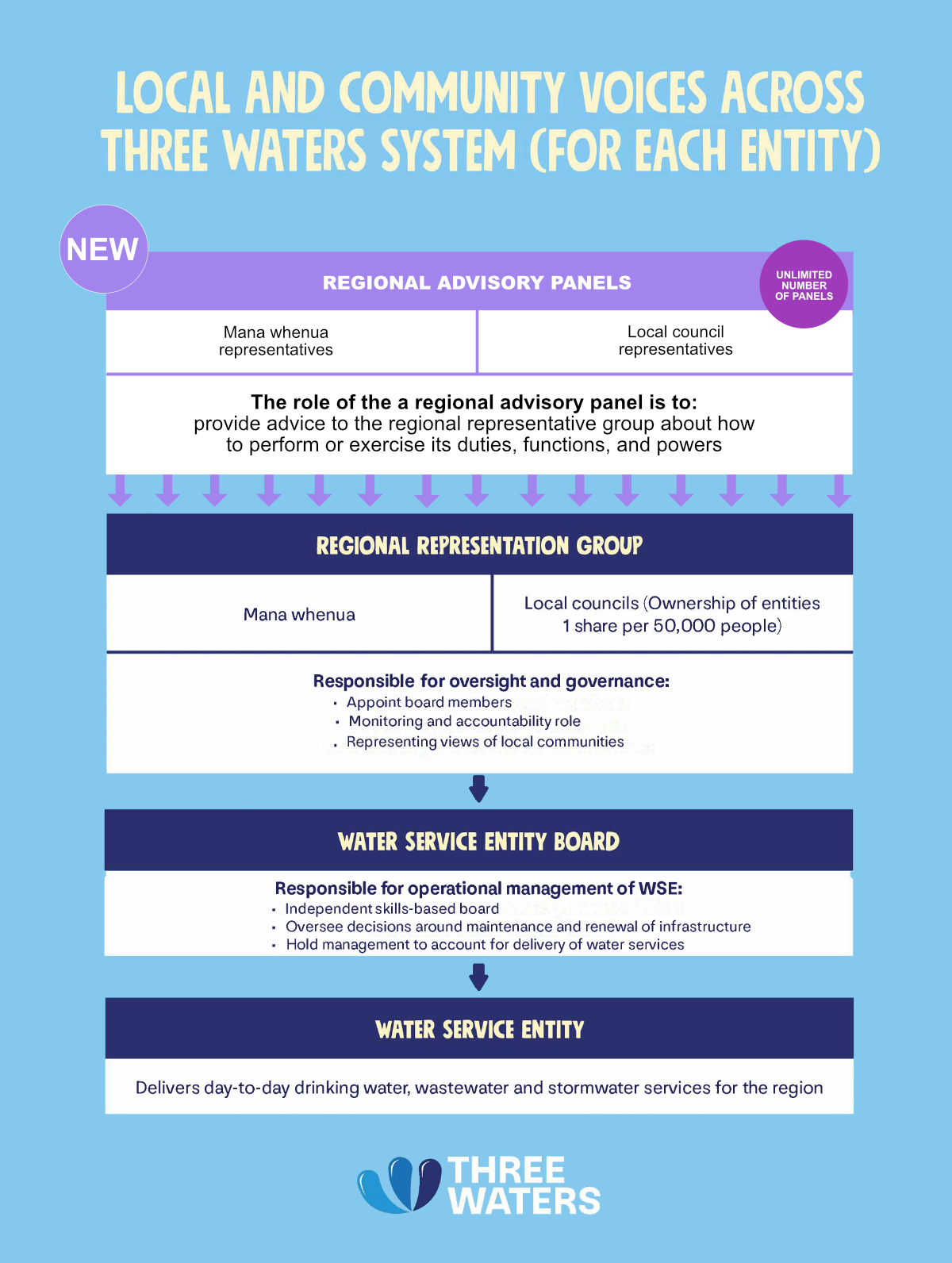 After its first reading in Parliament, the bill will be subject to the select committee process. We have not been told which select committee at this stage - so far the Three Waters reforms have been in front of the Health Select Committee. Please take the opportunity to make a submission when the time comes. And request an oral submission on the legislation - in person and in your local centre.

You can read the bill HERE.

The changes have done nothing to allay the legitimate fears about the unusual public ownership model, whereby Councils become "shareholders" - but with no rights other than the ability to decide whether or not to privatise - and that's only after seeking the approval of the Regional Representation Group (Water Services Entities Bill Schedule 4). The shares issued to Councils (more or less in proportion to their population - one share per 50,000 people) confer none of the normal benefits or obligations of ownership, and offer no more representation proportionate to their shareholding.

By this action, the government is taking away ratepayer owned property, and redefining ownership as we know it. Manawatu District Mayor Helen Worboys states her concern:

“If the Government can decide by decree to redefine ownership in this way it sets a worrying precedent over ownership on a far wider basis.”

Three councils – Timaru, Whāngarei and Waimakariri, have formed a partnership to take legal action against central government politicians. They are suing Local Government Minister Nanaia Mahuta to challenge what they see as the Government's attempt to "expropriate council-owned property" without acknowledging it is a "taking". Their statement of claim expresses concern about the precedent that is being set if the Government removes the rights of ownership of water assets from local councils. This legal action is in the High Court this week, 7 & 8 June. Click HERE for a Stuff report on the first day in court.

A challenge to the partnership principle

The Water Users' Group is also underway with a legal challenge to the Government’s Three Waters reforms. An interlocutory hearing to argue for the Crown to release the legal advice the Minister relied upon to say co-governance is required in the Three Waters reforms. This is due to be heard in the High Court on Thursday 4 August. The Crown is arguing that they may disclose the advice, but only to the lawyers of the Water Users' Group. It appears the government is acting to ensure the public won't get to see it. The Water Users' Group thinks that's not good enough. To read the full story, explained by Stephen Franks of law firm Franks Ogilvie, see HERE and HERE.

This won't be the only day in court for the legal team representing the Water Users’ Group. There is still the substantive argument to deal with - that co-governance is not required as part of the Three Waters scheme. This case will have implications outside Three Waters because it challenges the notion that the Treaty of Waitangi formed a partnership between the Crown and Māori. No date has been set for this hearing.

The essence of the case is explained in an interview with Stephen Franks HERE.

If you want to understand more about the background on this case (or read the Statement of Claim), check out the Litigation FAQs on the Water Users’ Group website HERE.