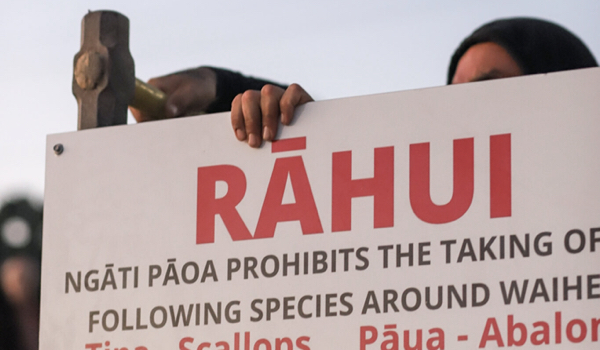 An iwi on Waiheke Island in the Hauraki Gulf has decided that it is they who should be in control of kaimoana around the island. Without gaining the legal authority to do so, Ngāti Pāoa has declared a ban on the gathering of certain species around the entire coastline of Waiheke.

The first inkling that Ngāti Pāoa was planning a rāhui came to light on Friday, 15 January 2021. The decision to engage the public was made the following Tuesday, with a so-called “public” meeting held two days later, on Thursday 21 January, at Piritahi Marae, Waiheke.

A search of Google, Facebook, the websites of Piritahi Marae and Ngāti Pāoa, plus both the local papers, revealed nothing about this “public” meeting. The notification appears to have only been communicated via email, to a select group of people and organisations.

An attendee at the hui reports the following:

At the conclusion of the hui the representative from Ngāti Pāoa declared that they have received “100% support of the community” and would be going ahead with the rāhui. A bold statement given the poor public consultation. 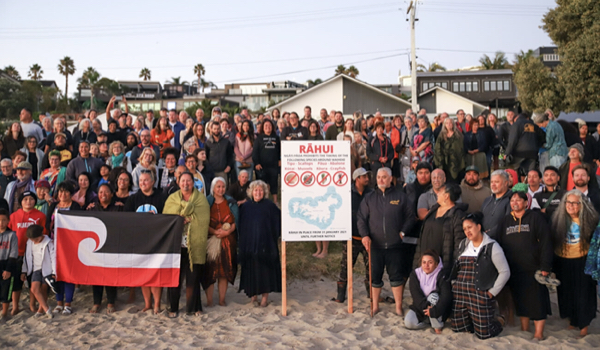 The Maori sovereignty flag having pride of place at the ceremony says it all – pointing very clearly as to the reason why the legal process was not being followed.

Ngāti Pāoa taking the law into their own hands could well be a manifestation of the push by some in the legal fraternity for a bijural justice system – one incorporating two bodies of law making. There has been talk of 'disrupting' the system, and 'forging new pathways'. Is this the real reason for eschewing the legal process and imposing this unauthorized ban? (See further information about this below).

There is some justification for a ban relating to the seafood specified in the rāhui. There is no doubt that kaimoana stocks in the Hauraki Gulf are suffering from over-exploitation and other environmental factors. But there is already an opportunity within iwi organisations to work to reverse the damage. For instance, as Iwi/Māori own fifty percent of New Zealand’s commercial fishing quota there is an opportunity to exert influence over the total allowable commercial catch - to push for more sustainable harvest levels and methods of fishing. The latest report on the State of the Gulf states that the total reported commercial catch of fish in the Hauraki Gulf Marine Park area in the most recent three-year period was around 30% greater than in three-years before the Park was established in the year 2000. The report also says that recreational catches of snapper, john dory and tarakihi have reduced, due to cuts in bag limits, the increase in size limits, and fewer recreational fishers (p.39).

The protection of the health and wellbeing of our marine environment would also be greatly enhanced by adding iwi support to the implementation of proposed Marine Protected Areas in the Hauraki Gulf Marine Park, which have been proven to be very successful in other areas. But iwi fishing interests have refused to support these initiatives, just as they refuse to support the proposed Kermadec Ocean Sanctuary, and an expansion of the Campbell Island Marine Sanctuary.

There is a lawful avenue for the implementation of a temporary closure of a fishing area under s186A of the Fisheries Act 1996. This includes the requirement for the Minister to “consult such persons as the Minister considers are representative of persons having an interest in the species concerned or in the effects of fishing in the area concerned, including tangata whenua, environmental, commercial, recreational, and local community interests” [s186A 7(a)]

Allowing for proper community consultation would help to allay concerns, aid in community compliance, and ultimately build a successful outcome for all.

If you have concerns about the legitimacy of this rāhui, the implementation of which is setting a precedent that may well be emulated in other areas, please express your views to the Minister of Ocean & Fisheries, Hon David Parker at: [email protected]

And to the Minister of Primary Industries, Hon Damien O'Connor at: [email protected]

Also see the John Douglas the petition Protect access to Waiheke’s coast & safeguard democracy in NZ and consider signing if you have not already done so.

STOP PRESS: Feedback is now being sought by the Ministry of Primary Industries regarding the rāhui. We have just received the following message:

“Formal consultation on the request from Ngāti Pāoa for a temporary closure under section 186A of the Fisheries Act 1996 begins tomorrow, and will run until 22 March.

Consultation details will be placed in the public notices of the NZ Herald, Gulf News, and Waiheke Weekender; on Fisheries New Zealand’s website here; and on MPI’s Facebook page here.

MPI’s Fishery Officers are not able to enforce the traditional rāhui placed Ngāti Pāoa, however they will enforce a temporary closure once it has been approved.

Go back to the February 2021 newsletter