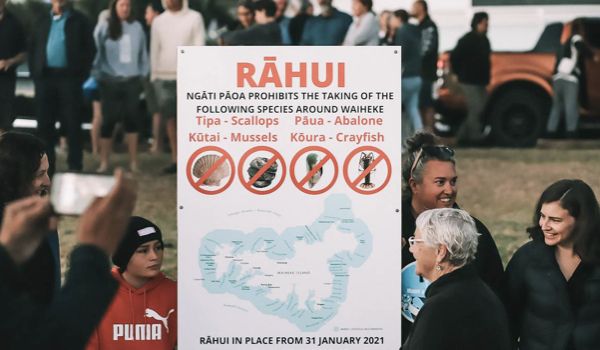 The Ministry of Primary Industries is calling for public submissions on the Ngāti Pāoa imposed rāhui around Waiheke Island. The closing date for submissions is Monday 22 March 2021.

The ban relates to the harvesting of four species of kaimoana - i.e. scallops, mussels, crayfish and pāua - the aim being to restore their declining numbers.

“Ngāti Pāoa consider that a temporary closure will recognise and provide for the customary management practices of tangata whenua in the exercise of their non-commercial fishing rights and allow time for scallop, mussel, rock lobster, and pāua stocks in the area to replenish and increase in number and size.”

According to the Ngāti Pāoa application, the purpose for closure is to replenish these taonga species to ensure the customary practice of gathering kaimoana for whānau (recreational take) and for tribal gatherings such as hui (meetings), tangihanga (funerals), wānanga (workshops) and marae hui.

You can read the rāhui application by clicking HERE.

Please see below some aspects of the proposed rāhui for consideration when making your submission.

There are good reasons to support measures to protect the marine environment, including species that are depleted and in need of a rebuild. There is no argument that there has been a decline in the density of harvestable kaimoana since human arrival. According to the  State of the Gulf Report 2020 the causes are primarily recreational fishing and commercial fishing, sedimentation, and pollution. However, aspects of the rāhui application need to be clarified and where necessary, amended. For instance:

“Tīkapa Moana is under threat from numerous factors including population and tourism growth around the Gulf, increased sedimentation, overfishing, pollution, invasive pests, and climate change. These factors have degraded marine habitats, upset the natural biodiversity and balance, and significantly reduced kelp forests, shellfish beds, and the number and size of fish to name just a few – all of which has been witnessed, first-hand, by islanders who enjoy its waters.” (p. 10)

While there is support for this rāhui, there is also considerable opposition. Over 1,600 people have added their names to the petition ‘Protect access to Waiheke’s coast & safeguard democracy in NZ’. The petition is evidence that claims by Ngāti Pāoa of community consensus is an exaggeration. You can read the reasons for the petition and sign it by clicking HERE.

The placing of this rāhui by Ngāti Pāoa around the coastline of Waiheke appears to be a manifestation of a proposal mooted in the Sea Change Plan, i.e. the establishment of ‘Ahu Moana’ zones around the entire coastline of the Hauraki Gulf Marine Park, including all islands. Ahu Moana are described in the Plan as a 50:50 co-management areas between mana whenua and local communities. See pages 48 -50 of Sea Change Hauraki Gulf Plan Marine Spatial Plan.

For more information on the rāhui, visit the MPI website ‘Proposed temporary closure around Waiheke Island to the harvest of scallops, mussels, rock lobster, and pāua, by clicking HERE.

The closing date for submissions is 5pm on 22 March 2021.  Email your submission to: [email protected]

For further thoughts on the proposed rāhui, please see the article on the Democracy Action website: ‘NGĀTI PĀOA TAKES THE LAW INTO ITS OWN HANDS’

Go back to the March 2021 newsletter