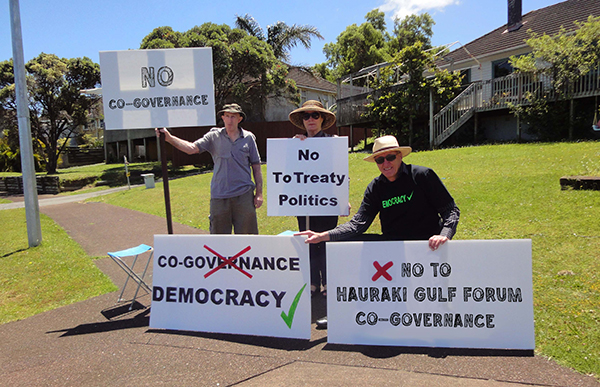 Currently, the Hauraki Gulf Forum is considering recommendations put forward for what is explained in a report as ‘updating and strengthening the Hauraki Gulf Marine Park Act’. Several major changes are being proposed.

This plan was revealed in a report which was listed on the agenda of the recent November meeting of the Hauraki Gulf Forum. It follows three previous reviews/reports presented to the Forum seeking similar outcomes:

Several aspects of this report are alarming from a democratic point of view. While there is a strong argument for the Forum to have increased functions and powers, this power should not be vested in the undemocratic body as recommended in the proposed co-governance model, with half the members unaccountable to the wider community. Currently elected local body representatives have the lion’s share of the seats at the Forum table. The fact that the Auckland Council's representation of seven members is listed in the report as a problem is revealing as to the intention of this proposal. (These seven represent by far the largest group of citizens - over 1.6 million).

Of note also is a proposal to include 21 of the 28 Auckland regional parks, both those in the catchment and on the islands, in the Hauraki Gulf Marine Park. Currently these regional parks are managed by Auckland Council, but if this proposed co-governance model goes ahead, it is possible - even likely - that the management of these parks would transfer to this new authority.

The report presented to the Forum comes with the recommendation that the report is adopted, and seeks an agreement that it is presented to Ministers for their consideration. However, some members of the Forum expressed the view that they would like more time to consider this proposal and as a consequence, the item has been deferred until the February 2022 meeting of the Hauraki Gulf Forum.

Power play underway over control of the Hauraki Gulf
https://www.democracyaction.org.nz/power_play_underway_over_control_of_the_hauraki_gulf