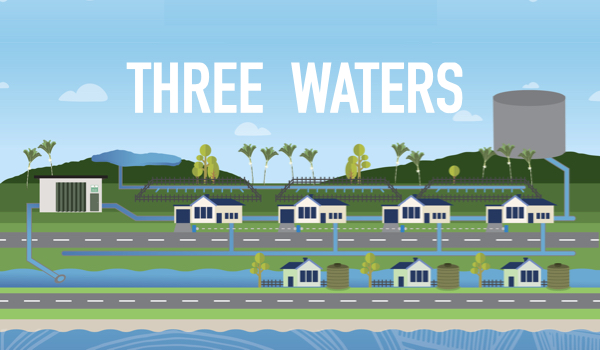 Currently the majority of our three water services (drinking water, wastewater and stormwater) are publicly owned and delivered by our 67 local councils. We have 61 territorial authorities and seven unitary authorities providing services, along with major providers in Auckland and Wellington.

Water service and delivery forms a large part of a council’s responsibilities, along with local planning, roading, waste collection etc. Ensuring accountability is kept at a local level means communities have a say in the water governance matters important to them. But this is about to change.

This review has already delivered new legislation - the Water Services Regulator Act - which created the  water services regulator ‘Taumata Arowai’. This body will oversee and enforce a new drinking water regulatory framework, and have oversight of the management of our wastewater and stormwater networks. This is designed to ensure that minimum water standards are met no matter who the supplier. This new Crown entity is currently being established, and will become responsible for drinking water regulation when the Water Services Bill is passed. This bill is currently in Select Committee, with their report back to Parliament due 8 June 2021.

The Government claims that these reforms alone will not be sufficient to address many of the “persistent issues” facing our three waters systems. They believe that service delivery and infrastructure funding arrangements also need to be addressed. This is reportedly due to significant under-investment by some local councils over a long period of time. On top of this, councils have increasing obligations to improve freshwater and address resilience to climate change and natural hazards.

The Government believes that the estimated $70 billion - $96 billion of investment required over the next 30 years is too much for local councils to manage using existing funding models (e.g. water rates).

Instead, the Government is proposing the establishment of ‘water services entities’, whereby councils transfer their water infrastructure and delivery services to a small number of multi-regional entities. The Government believes that a small number of entities covering a larger area of population will mean smaller communities could realise the benefits of scale, and that the larger entities would have a big enough asset base to be able to borrow to scale.

Currently the government is consulting with stakeholders - the stakeholders nominated by the Government for this engagement process being local government and iwi/hapū - on their methodology and progress in working out the boundaries and size for each entity, and requesting feedback on a range of options for governance and ownership models.

ENTITY SZE AND BOUNDARIES: The Government has yet to decide on the proposed number, size or boundary of each entity. In late 2020 they issued a request for information to councils in order to establish the current state of water infrastructure, current service delivery arrangements, and future plans including upgrades. This information will allow the government to complete this stage of the reform.

As a result of the data provided by the councils the Government recently released an interim assessment report. This includes a recalculation of the original estimation of the investment needed over the next 30 - 40 years to maintain and enhance existing infrastructure and add build infrastructure to meet growth requirements. This amount has risen to a new figure of between $110 billion - $170 billion (page 10).

The data has also caused the government to reconsider whether the infrastructure for stormwater should stay under the management of local councils as this is an extremely complex area that needs more thought.

ENTITY OWNERSHIP MODELS: The Government has explicitly stated that there will be a bottom line of public ownership and that there will be mechanisms in place to ensure the entities cannot be privatised in the future. However, the Government will also consider options for Crown and iwi/Māori interests in the new water services entities. This is mentioned in the Cabinet Minute of Decision ‘‘Progressing the Three Waters Service Delivery Reforms’ (clause 21), without any other information to clarify these options - other than the mention of a potential for delivery partnerships, (p.68 of Three Waters Reform Programme - March 2021).

ENTITY GOVERNANCE MODELS: During March the Government undertook engagement workshops with local government, and also with iwi/hapu groups. These workshops were held to present the Government’s latest thinking on details of the reform proposals.

According to the presentation based on the  Local Government and Iwi/hapū engagement consultation document - the water services entities would be overseen by a board of directors. Various structures for governance are being explored. Options include: 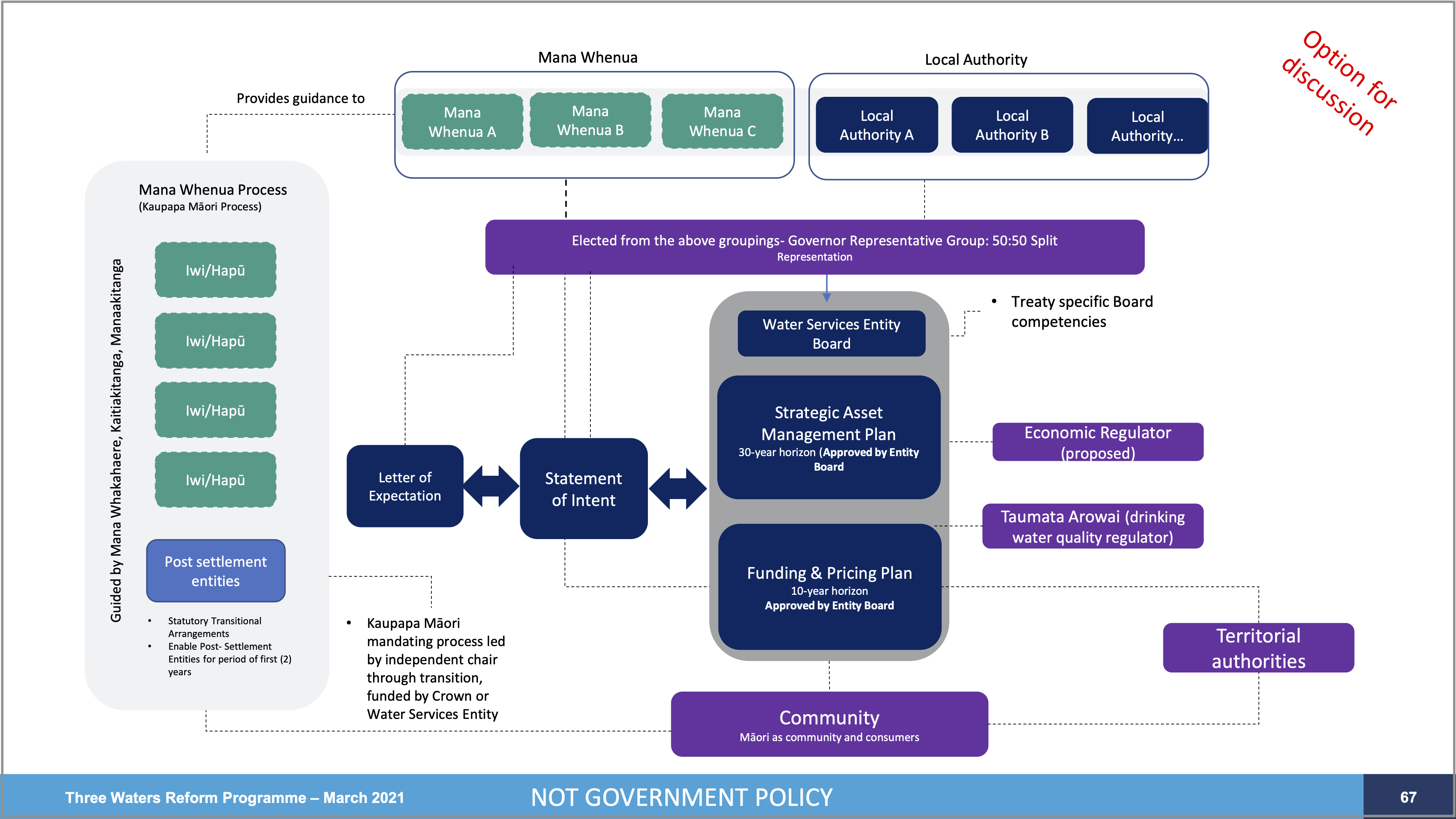 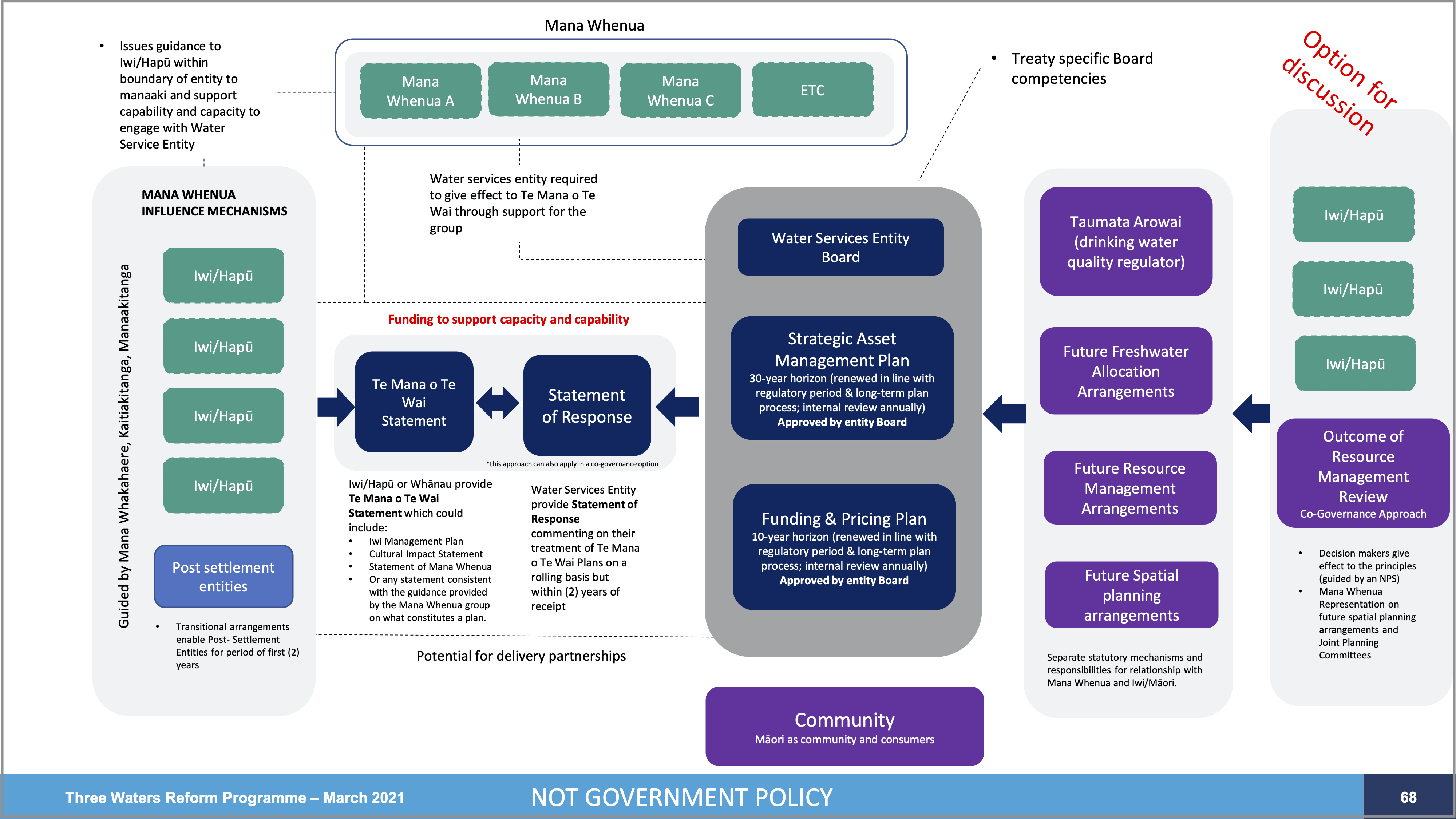 The government claims that the reform programme is being progressed through a voluntary partnership-based approach with the local government sector, who can choose to opt out before the end of 2021 deadline. Whether this is true is yet to be seen - cabinet documents and a briefing to Local Government Minister Nanaia Mahuta appear to indicate councils could be made to relinquish their water services to the new entities if too few opt into the proposed restructure voluntarily.

The governance options outlined in the Three Waters Reform Programme discussion document are profoundly undemocratic. The proposed models for the Water Services Entities are even further removed from public accountability than what we have currently. The board members would be given the power to decide when and where infrastructure would be built and maintained, have the ability to set and impose water rates, and to oversee the allocation and reallocation of water supplies as they see fit, with virtually no way for the general public to influence these decisions. Government documents speak of the possibility of processes for public consultation, but under the models proposed there would be no direct accountability to the public, nor any way for the public to influence policy and direction, such as by voting for members of the board.

On the other hand the proposals are loaded with provision for iwi/Māori participation. One of the proposed models points to dual governance - mana whenua on one hand, and Local Authorities on the other. With the second model presented by the Government it appears mana whenua are in the driving seat - supplemented by an ‘etc’, (whatever that means - see diagram p.68). Additionally, mana whenua are singled out for direct involvement -  the proposals include mechanisms to enable each Iwi/Māori in the area covered by the Water Services Entity to directly influence outcomes, and be funded to do so.

Additionally, there are provisions relating to the obligation requiring anyone who has functions or duties under the legislation to give effect to Te Mana o te Wai (Clause 14 of the Water Services Bill). Te Mana o te Wai is described by Minister Mahuta as a whole-of-system approach to the management of our water that recognises the Māori worldview and knowledge.

If a decision maker is required to “give effect to” something, it must be utilised, implemented or followed. However, Te Mana o te Wai is a concept that is flexible and unclear. Therefore, the requirement that “all persons who perform or exercise functions, powers, and duties under the legislation to give effect to Te Mana o te Wai” is an edict immersed in uncertainty. Under this clause the water services suppliers would be vulnerable to arbitrary directives, an undesirable situation which contravenes an important principle of law i.e certainty in law.

Firstly, our local bodies do not have to take up the option of shifting the responsibility for water services and delivery from themselves to this more centralised model. Secondly, if they do decide to do so we do not have to lose the democratic control of our water. We can keep a level of public accountability by allowing the public to continue to have a say over the governance of these entities. Just as we vote for District Health Boards, and local and community boards and licensing trusts etc, we could also vote for Water Boards. By doing so we can ensure that the public interest is at the centre of decision-making. This is also a far more robust way to keep the entities in public ownership, rather than the models the government is proposing.

The Government is due to release a public consultation document on its proposals for the water service entities in mid-2021. In the meantime, you can contact your mayor and councillors to let them know that you are not happy to see an unelected, unaccountable, undemocratic board take control of the water services delivery and infrastructure in your area. Petition them to ensure that democracy is built into these proposed entities. Chances are many of them are not happy with this proposal either and just need to know that they have the backing of their community.

Below is our suggested wording, please feel free to change.

I am writing to you about the Government’s Three Waters Reform Programme. According to a Department of Internal Affairs report, ‘Central/Local Government Three Waters Reform Programme’, councils and their communities are to make decisions on remaining in or opting out of the reform programme. I wish to voice my opinion about aspects of this programme, such as the following.

For these reasons I am urging you to vote to opt out the reform programme as proposed by the Government.

Latest updates for this campaign