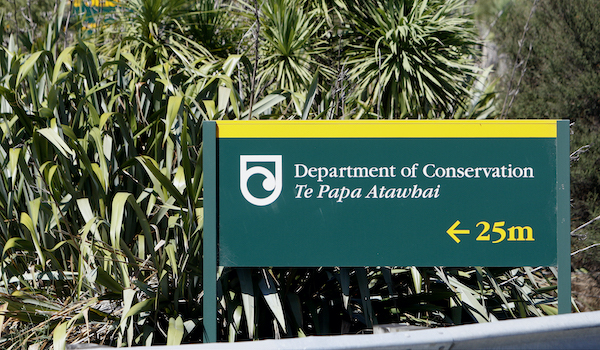 The key function of the Department of Conservation is to ensure that public conservation land is appropriately managed, protected and preserved for New Zealanders - now and in the future. However, there appears to be a shift in priorities at the Department to accommodate the Treaty “partnership” ideology.

This shift is illustrated below:

In 2019 the Options Development Group (ODG) undertook a partial review of two DOC policies: the Conservation General Policy and the General Policy for National Parks. Together the policies cover issues such as:

The Group was asked to review the policies to ensure they were “well placed to give effect to the principles of the Treaty” to “help [DOC] meet their responsibilities as a Treaty partner.”

However, when draft recommendations were leaked in April 2021, it was apparent the ODG had gone far beyond their remit, and according to a whistleblower, “the process has largely been kept behind closed doors.”

This included a recommendation that DOC “reform the ownership model of public conservation lands and waters” and “provide for the delegation, transfer and devolution of functions and powers within the conservation system to Tangata Whenua.”

See a copy of the leaked draft recommendations below.

For an interesting interview with the DOC whistleblower, listen to the Wild Podcast available HERE.

According to the DOC website, the final report was to be presented to the Director-General in mid-2021, and public consultation was due to take place in “late 2021”. However, it is becoming clear that at least some of these recommendations are already being actioned.

2. The reclassification of Stewardship Land

Hot on the heels of the ODG report, and in line with the recommendation to “Undertake a review of all classifications applied to public conservation lands and waters to recognise Tangata Whenua relationships,” the government announced that they had established two “independent expert national panels” to review DOC stewardship land in the Northern and Western South Island.

Stewardship land (or Stewardship areas) are areas that were allocated to DOC when the department was established in 1987. It is the generic name for conservation areas that had not been assessed and identified as requiring additional protection. Seemingly a good idea, as it is land that has been sitting without review for 30+ years. However, there are incongruities in the Terms of Reference which conflict with protecting the conservation estates natural and historical values, such as:

“If requested by the Minister of Conservation or Department officials, the panels will review stewardship land parcels that are subject to or have been identified as potential mining locations and make revised land classification recommendations. This may require the panel to revise the order in which they are reviewing the stewardship land within their region. Mining related applications on stewardship land will incur fees on a cost-recovery basis.”

This appears to point to an interest in converting some conservation land to mining.

In a move that resembles another ODG recommendation, i.e., “Make immediate changes to make sure that Tangata Whenua are engaged in decision-making that affects their interest, including in the context of permissions and concessions,” the government has established a Ngāi Tahu Mana Whenua panel to work alongside the two national panels.

According to Ngāi Tahu spokesperson Lisa Tumahai, “The Ngāi Tahu-appointed mana whenua panel will provide information on stewardship land within the Ngāi Tahu takiwā to enhance the Minister of Conservation’s decision making.” Ms Tumahai says that while Ngāi Tahu environmental values must be protected and enhanced, the reclassification process will also determine whether some land can be made available for other purposes.

“We want to protect native species, significant ecosystems, and traditional places for future generations. It’s also important that as part of this process mana whenua and the public have an opportunity to provide their views on whether economic activity should be undertaken in some places if it is appropriate to do so.”

Considering that Ngai Tahu has interests in mining in the South Island, it is likely the panels will face conflict of interest issues throughout the reclassification process.

DOC is currently asking for submissions on their reclassification process. See below for information on how you can have your say.

In February this year, (2021) DOC commissioned Deloitte to prepare a paper outlining alternatives to the current way revenue received from concession holders is distributed. (A concession is a lease, license, permit, or easement to use public conservation land to conduct an approved commercial activity). Currently, DOC’s fee structure for activity fees is determined by a percentage of revenue earned through a concession.

The review sought to “provide the Department of Conservation (DOC) with an opening to engage with [their] Treaty Partners on whether the Percentage Revenue Framework is ‘fit for purpose’ from a Treaty Partner perspective.”

Options presented include providing mana whenua with the opportunity of exclusive use of DOC land in carrying out commercial activities, at a fee discount or no charge, allowing iwi to manage and grant concessions under a new “co-designed” framework, and a revision of the current funding allocation model, to be “co-designed” with iwi/hapū.

A summary of the options is below. The full document can be accessed HERE. 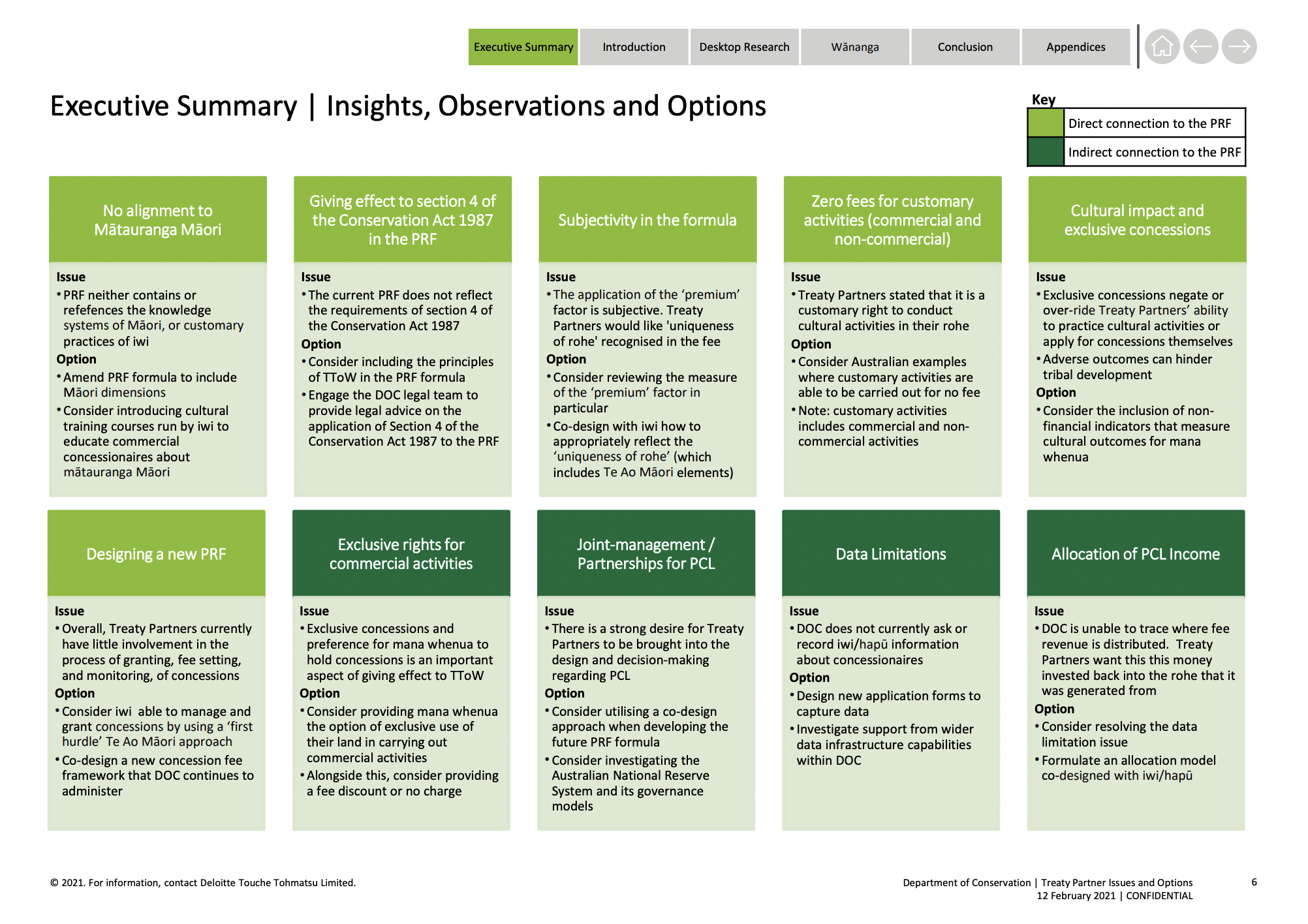 4. The development of Management Plans

Reflecting the Options Development Group’s recommendation that DOC “Provide resourcing to build capability and capacity for the expression of Tiriti/Treaty partnership for both Te Papa Atawhai (the Department of Conservation) and Tangata Whenua, including but not limited to [the] development of planning documents,” DOC has commissioned iwi to write their 10-Year Management Plans.

The danger to the conservation estate in implementing such a policy is explained in a letter received from an ex-member of the West Coast Conservation Board. See excerpt below:

“Another concern is DOC’s directions with co-writing/reviewing Management Plans. [IWI] has drafted a contract which DOC is currently reviewing. The idea is that [IWI] planners would be paid by DOC to carry out much of the work. What is of concern is this process circumvents all of the usual checks and balances that would be in place to ensure the process did not become corrupted. For example, DOC would need to abide by the public sector guide for managing conflicts of interest.

“[IWI] would be exempt from these checks and balances. That is to say, there is nothing to stop [IWI] from producing a plan which allows for iwi economic aspirations or even the aspirations of other third parties partnering with [IWI].

You may have noticed that a theme is emerging - and this theme that does not necessarily have the best interests of the conservation estate at heart. The danger is that once DOC strays from its established objectives, issues like that which has recently emerged in Lake Waikaremoana where the Great Walk has been closed for months as local iwi say their relationship with the Crown has failed. Please read Stuff report HERE.

It is difficult to see we will achieve the best outcomes for our conservation estate under the current trajectory as outlined above. We need to discuss the issues and decide where, as a nation, we are heading.

WHAT WE CAN DO

DOC is currently asking for submissions on their proposal for “Streamlining the stewardship land reclassification process”. All the relevant information is available on the DOC website HERE. Submissions close Friday, 18 March 2022.

You can also contact the PM, the Minister of Conservation Kiri Allan, and your local MP about your concerns.

Jun 07, 2022
Following hard on the heels of calls for submissions on “Streamlining the stewardship land reclassification process”, which closed on March 18, DOC has announced the commencement of a 40 day consultation period allowing for public input into proposed reclassifications of 504 parcels of stewardship land on the West Coast of the South Island. The consultation period runs until 26 July 2022. Continue reading