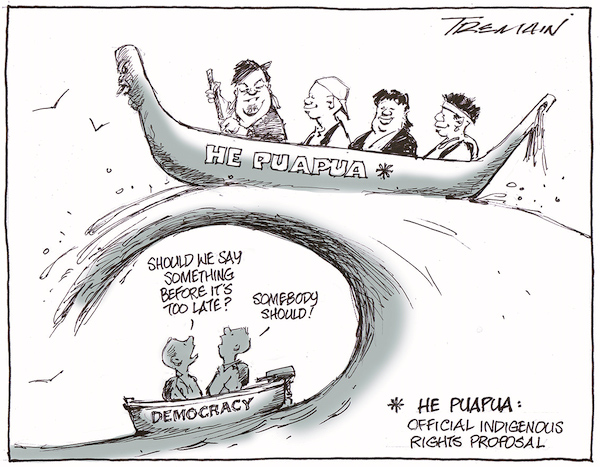 While the UN was originally created to uphold the sovereign power of existing states, developments since the 1970s have seen the UN provide a vehicle for indigenous peoples to organise collectively in favour of their rights outside of existing state authority. This follows indigenous peoples around the world lobbying the UN, calling for their country to be decolonised and for their sovereignty as a distinct people to be recognised.

The result of this is the highly controversial United Nations Declaration on the Rights of Indigenous Peoples (UNDRIP). This is the so-called aspirational and non-binding agreement that Helen Clark’s Labour Government considered too radical to support in 2007 (alongside Australia, Canada, and the United States), but John Key’s National Government unexpectedly signed in 2010.

What is the United Nations Declaration on the Rights of Indigenous Peoples?

The Declaration on the Rights of Indigenous Peoples is a non-binding resolution passed by the United Nations in 2007. It established a universal framework of minimum standards for the survival, dignity, and well-being of the indigenous peoples of the world and it elaborates on existing human rights standards and fundamental freedoms as they apply to the specific situation of indigenous peoples.

While the Declaration is intended to reaffirm the rights of Indigenous peoples, it does not intend to allow for the introduction of any laws, policies or practices specific to any peoples or individuals based on their national origin, race or ethnicity (Annex). Nor does it intend to dismember or impair the political unity of sovereign States (Article 46).

Despite this, and despite Article 3 of the Treaty of Waitangi giving Māori the same rights and privileges as British subjects, in 2019 the Labour Government commissioned an “independent working group” to draft a plan to consider how our laws and policies could be adapted to become consistent with the Declaration.

The group, in their terms of reference, was asked to provide recommendations on the form and content of a Declaration Plan that comes "from the intersect between government priorities, Māori aspirations and international Indigenous rights discourse". This appears to have allowed the authors to stray from a plan based on UNDRIP, instead focussing on the revisionist's version of the Treaty of Waitangi, the failed 2016 Matike Mai report on constitutional transformation, and the Waitangi Tribunal's report on the WAI 262 claim.

Instead of following the Declaration and developing a plan that would work within the confines of our democratic system to achieve better outcomes for Māori, the group's He Puapua report sets out to introduce new constitutional arrangements that will significantly impact the lives of all New Zealanders. If the recommendations in this report are implemented, New Zealand will turn from a nation-state to an ethnostate - that is one where political, social and economic rights are based on ancestral membership criteria rather than citizenship.

He Puapua calls for constitutional change

There is no doubt He Puapua intends to introduce new constitutional arrangements. Aside from "constitution" or "constitutional" appearing 103 times in the document, the introduction to the report explains that: “He puapua” means “a break”, which usually refers to a break in the waves. Here, it refers to the breaking of the usual political and societal norms and approaches. We hope that the breaking of a wave will represent a breakthrough where Aotearoa’s constitution is rooted in te Tiriti o Waitangi and the United Nations Declaration on the Rights of Indigenous Peoples.

The report is therefore a summary of the steps needed to introduce these new constitutional arrangements by 2040 (200 years after the signing of the Treaty). Called Vision 2040, new Māori government (Rangatiratanga) is set to be introduced to sit alongside our current government (Kāwanatanga) in equal “partnership”. The “two governments” would work independently and come together over issues of “mutual” concern (page 11). The plan states that the current government (Kāwanatanga) sphere would also be required to allow for Māori involvement, however, this would not be reciprocal.

What's proposed in this report is a radical departure from the intention of UNDRIP. This report proposes to radically reshape our country along racial lines.

Even though Prime Minster Jacinda Ardern states that He Puapua is not government policy, recent actions by her Government show that this plan is being steadily implemented in a wide array of domains.

He Puapua covers every aspect of our civil and political lives

How the "two governments" will work together is intentionally unclear, leaving it to Māori to decide. However, the report gives some guidance around the kāwanatanga and rangatiratanga "spheres".

The report says that order to move towards a bicultural, mātauranga-informed state service/kāwanatanga (page 68), there needs to be: the development of partnership bodies at a governance level (also known as co-governance); the reform of the law, policies or practices relating to (among others) health, education, resource management, conservation, Māori language, arts and culture, heritage to recognise and support traditional Māori approaches in each of these areas; and to ensure that all government bodies have the capability to engage effectively with Māori, with tikanga, reo and mātauranga Māori properly valued and understood. To build capability the report says it is important to ensure all government agencies both "upskill" current public servants and "enhance" the recruitment and retention of Māori public servants (page 50).

The plan towards Māori rangatiratanga calls for the Crown to significantly enlarge the iwi/hapū/whānau estate through the "return" of Crown lands and waters, including the marine and coastal area, to Māori ownership (page 58); and for the Crown to relinquish it's "assumed" exclusive kāwanatanga authority over land, resources and taonga. The report says that all law, policy and processes should support flourishing iwi territories, and allow iwi/hapū/whānau to positively contribute towards the control, access to, and management of, all lands and resources within their rohe (region) in accordance with tikanga and mātauranga Māori. This includes the transfer of government (kāwanatanga) powers across the resource management spectrum (RMA, conservation, fisheries etc.) (page 65). The report says that as incremental step-changes are achieved, and as Māori decide they wish it – certain governance functions (e.g., education, health, social services etc) may shift from the kāwanatanga to the rangatiratanga sphere (page 11). The report suggests there are multiple streams from which financial contributions to Māori self-determination might be sourced, including, for example, levies on resource use where Māori have "a clear interest if not strong claim to ownership", such as water. The report also suggests that Māori receive royalties for the use of particular natural resources such as water, petroleum and minerals.

Below is a summary of actions the government has taken the contribute to the aspirations set out in He Puapua. The table also indicates where other parties have called on the government to make changes that are called for in the He Puapua plan.

These examples show some of the steps He Puapua says are necessary to build to the ultimate goal -  a two-system governance of New Zealand.

What's wrong with designing a system in order to provide equity for Māori?

He Puapua is not about achieving equality or equity of outcomes between Māori and other population groups. The plan specifically says on page 79:

"In the context of Indigenous rights, the concept of “special measures” has its limitations. Measures directed towards Māori should not be framed as "special measures" because they are only justified for as long as is necessary to attain equality for disadvantaged groups. In contrast, Indigenous peoples' rights are permanent and are thus required for reasons beyond simply achieving parity between citizens."

He Puapua is not Government policy, it's just a report by some academics, right?

It's hard to say what will happen next with He Puapua. What we do know is that Willie Jackson is currently consulting with select Maori groups to develop a Declaration Plan. What they haven't committed to is how He Puapua is being used as part of this consultation. However you cannot unring a bell. The report is out there, it will be used to form the feedback received as part of the consultation process.

According to a December 2021 report from Te Puni Kōkiri (the government’s principal policy advisor on Māori wellbeing and development and the department leading this activity), the current timings to develop a Declaration Plan are:

What can we do?

Latest updates for this campaign