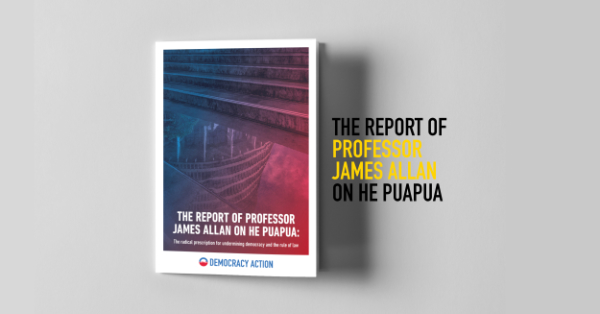 Towards the end of 2012 Democracy Action commissioned Professor James Allan, of the University of Queensland, to produce an analysis of the He Puapua Report  - a report that calls for highly controversial constitutional change. Specifically, we sought Professor Allan’s opinion on the implications for New Zealand’s liberal democracy in adopting recommendations made in He Puapua, and what this would mean for the future of New Zealand.

After studying He Puapua, James concludes that:

“This is a radical Report. Its recommendations are radical. Were those recommendations to be fulfilled to any considerable degree they would undercut majoritarian democracy; they would impinge upon elements of the Rule of Law; and they would exchange newer, worse, more aristocratic constitutional arrangements for older, better, more democratic ones.”

To coincide the release of Professor Allan’s report, he was invited to New Zealand to speak at public meetings in Auckland and Christchurch, and at a function at the Beehive. This was done in the knowledge that far too many people know very little about He Puapua and are unaware of the stealthy way it is being implemented. His visit also gave us the opportunity to question and publicly debate the damage the Government’s divisive and separatist policies are doing to our democracy.

The public meetings were well attended, at which we were privileged to listen to James’s informative and entertaining presentations. Some key points made by James included:

You are welcome to share this link with your friends and families.

For more on James Allan’s analysis of He Puapua, visit our website HERE. This includes links to recordings of interviews James had with Leighton Smith, Michael Laws for The Platform, and Dr Oliver Hartwich (NZ Initiative).

Go back to the August 2022 newsletter