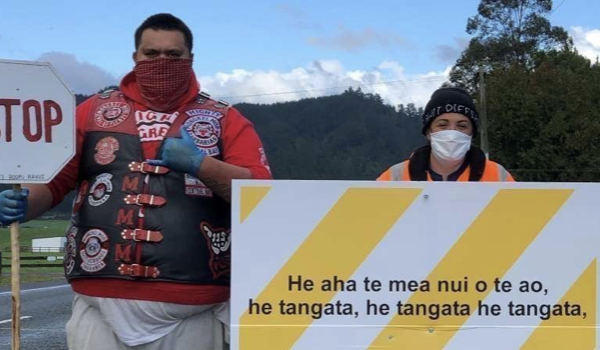 The vigilantes manning the unauthorised roadblocks on public roads have no more legal authority to do so than your neighbour. Despite this, the highest authorities in Government and Police are encouraging these self-appointed groups to stop New Zealanders travelling and to turn them back if, in their inexpert opinion, motorists are breaking travel restrictions.

The continued Government, Police and Council support of these roadblocks has become untenable, especially so when Police leadership in Northland issued a directive that they are to be present at all community checkpoints, and they are not to leave even if an emergency occurs nearby.

This development is further endangering the health and safety of the public.

Strangers stopping your car and demanding personal details is intimidating, particularly with patched and unpatched gang members present - they are not there to deliver scones to volunteers! It is incredible that even a couple of days ago Deputy Police Commissioner Wally Haumaha said “of course, you've heard that there are gang members on these checkpoints but that just hasn't been the case." A simple internet search throws up dozens of images and videos which prove this assertion wrong.

Police are also touting the reduction in the number of checkpoints which are reportedly fewer than 10 during level 3. But here is a simple solution - if these roadblocks really are helping control COVID-19, and if every roadblock theoretically has a Police officer present, why not just have Police or Health Officers man the checkpoints lawfully? The answer is that roadblocks are not just about health, they are about exerting power over other New Zealanders. Wally Haumaha has been reported as saying the roadblocks “could be seen as an expression of Treaty rights”.

We at Democracy Action welcome the impending demise of the illegal COVID-19 roadblocks, as indicated by the Police Commissioner Andrew Coster, but warn that it is highly likely they will be back again under another pretext. A dangerous precedent which challenges the concept of equality before the law has now been set. The constitutional implications of this campaign of defiance and the official acceptance of it needs to be challenged.

Please add to the backlash against these roadblocks by demanding they be shut down. Send your messages to the following:

The Leader of the Opposition, Hon Simon Bridges: [email protected]

Additionally, you can make a complaint directly to the Police using the online form. It is available here:  https://forms.police.govt.nz/forms/complaint/52

One News: Calls for police to shut down Māori-led roadblocks as public report they feel 'intimidated'

Go back to the May 2020 newsletter

Jun 15, 2020
Democracy Action fully supports recent calls for a Royal Commission into the COVID-19 response, and strongly suggests its remit includes an expert examination of the legality, or more likely illegality, of iwi roadblocks. Euphemistically called ‘community checkpoints’, these roadblocks purported to protect isolated communities from the pandemic but were inconsistent with legal instructions to the general public. Continue reading