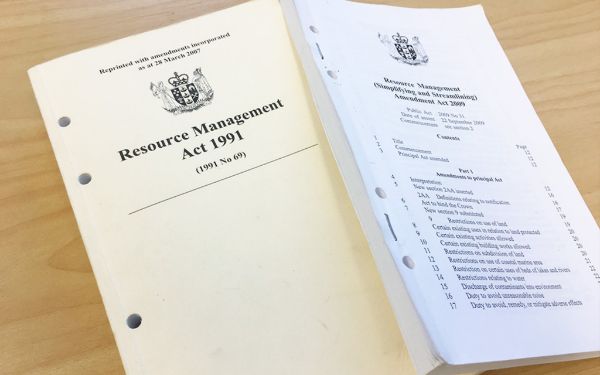 Your chance to have a say on the preliminary draft of the Natural and Built Environments Act - one of three to replace the RMA - is running out fast. This opportunity closes in 2 days’ time - at 11:59 pm on Wednesday 4th August.

There is not much in the preliminary draft of the Government’s proposed resource management reforms that will meet the stated aim of reducing the cost and time taken to consent projects or simplify the rules for building houses. On the contrary, rather than simplify some of the proposals will add to the complications.

The Government has released a preliminary draft of the first of those laws, the Natural and Built Environments Act, for consideration by the public. It is available by clicking HERE. Also, see Overview of the resource management reforms

The 'exposure draft', as it is called, is an early version of the significant parts of the bill which is intended to garner feedback. The draft will go to the Environment Select Committee for a select committee process, but instead of progressing through the House and eventually becoming law, the report on the exposure draft will go back to the Environment Minister, David Parker. He’ll use that feedback to inform his final version of the bill, which will be introduced to Parliament again, and go through the full legislative process.

Please see excerpts from the NBA exposure draft below, although it is recommended the document be read in its entirety to gain a clearer picture of the proposed reforms.

The exposure draft has adopted the Panel’s proposal to develop one Natural and Built Environments Act (NBA) plan per region, prepared by a planning committee comprising representatives from local government (regional and territorial), central government (Minister of Conservation), and mana whenua (s.44). The intention is to consolidate over 100 RMA policy statements and regional and district plans into under 20 in total across the country (s.45). (The Government originally proposed approximately 14 regional plans).

Comment: It appears this is intended to give the Government much greater say over how councils plan and zone. This would have a big impact on the role of councils, and local democracy. The reassignment of planning roles and responsibilities largely away from city and district councils to these regional councils, which would create and presumably administer the new spatial plans, would require significant changes to the structure of local government. This represents a loss of local control and the erosion of the mechanisms whereby citizens hold decision-makers to account.

Regional spatial strategies (RSSs) will be a key mechanism in the resource management system requiring local government, central government, and iwi, hapū and Māori, and to take a joined-up strategic vision of the future. This is about identifying the big issues and opportunities facing a region and identifying how it will grow and change over the next 30 plus years. RSSs will provide a clear strategic direction to decision-makers (s.52). RSSs will need to be informed by robust information and evidence, including mātauranga Māori, which is proportionate to the level of detail required. RSSs will also need to uphold relevant Treaty settlements and customary rights (s.55).

NBA plans will be an important mechanism to reflect te ao Māori perspectives on the environment and manage resources in a way that actively protects iwi, hapū and Māori interests. They are also a key mechanism for giving effect to the principles of Te Tiriti (s.217).

Greater emphasis on the principles of the Treaty of Waitangi

The Government will work with local government and Te Tiriti partners ahead of and during the transition, to establish enduring relationships and ensure support is in place, particularly as the new NBA plans and RSSs are developed. The Government is providing substantial funding for implementing the reform and establishing a well-functioning new system, including the guidance, processes, and tools required (s.69).

Democracy Action received the following legal advice on the interpretation of “have regard to” and “give effect to”:

If a decision-maker is required to “give effect to” something, it must be utilised, implemented, or followed. On its face, this is a strong directive creating a firm obligation. However, the implementation of this directive will be affected by what it is that must be given effect to. A requirement to give effect to a policy framed in a specific and unqualified way may, from a pragmatic perspective, be more prescriptive than a requirement to give effect to a policy that is phrased more broadly.

Please click HERE to make a submission on the Inquiry on the Natural and Built Environments Bill. Or send your feedback to: [email protected]

Stuff: Top of the south pushes back on 'costly' cross-regional RMA proposal

Go back to the August 2021 newsletter

Resource management law replacement a can of worms!

Dec 14, 2022
The first two of three new Acts to replace the Resource Management Act 1991 – the Spatial Planning Bill and the Natural and Built Environment Bill – passed their first reading in November and are open for submissions until the 5th February 2023. Continue reading

Nov 05, 2019
It has been quite some time since we covered the issue of Cultural Values Assessments (CVA). This does not mean they are no longer an issue. To the contrary – the taniwha has been quietly working in the background, sharpening its teeth – as evidenced by reports on a project undertaken to research the effectiveness of the CVA process for influencing resource management and consenting in Auckland, and recommending ways to increase iwi/hapu involvement in the resource consent process. Continue reading