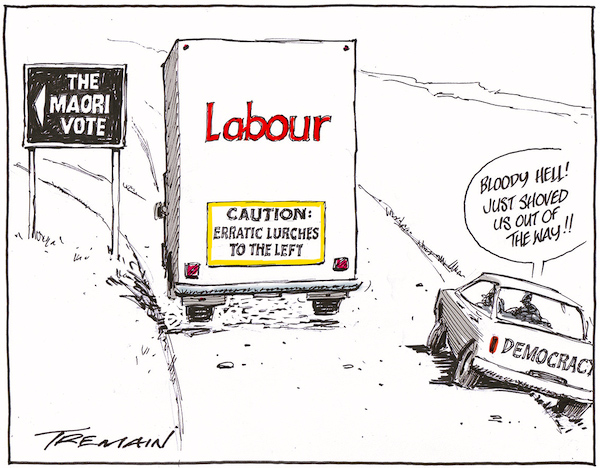 Labour’s Māori Manifesto 2020 recommits to the partnership path with Māori. They will continue to support the role of Māori Crown relations – Te Arawhiti in growing the capability and capacity of government departments and organisations to be better Treaty partners, promising to look to take even bolder steps to create change.

The Māori Party wants to go the whole hog and simply implement all Matike Mai recommendations.

The radical and far reaching  Matike Mai constitutional transformation report recommends completely new power structures. It calls for a new political system by 2040, in which Māori and the government share power, resources and responsibility for resources and social policy. Matike Mai suggests six different models as to how this might work. The proposed models can be found on pages 104 – 112. See also the group’s suggested plan of action on page 113.

As former Prime Minister David Lange explained in a speech presented in 2000, the Treaty of Waitangi was a contract between the Crown and Māori, not a ‘partnership’. He said treating it as a partnership was not only “absurd” but doing so would result in the introduction of profoundly “undemocratic” rights and entitlements.

As we see today - he was so very right!

The campaign for radical constitutional change in New Zealand is part of a wider and far reaching attack on Western civilisation and Western democratic values, conventions, institutions and philosophical foundations. For a brilliant analysis of this ideological war, read ‘What no one's talked about during this election campaign’ by writer Karl du Fresne.

Go back to the October 2020 newsletter