He Puapua: The action plan to destroy democracy 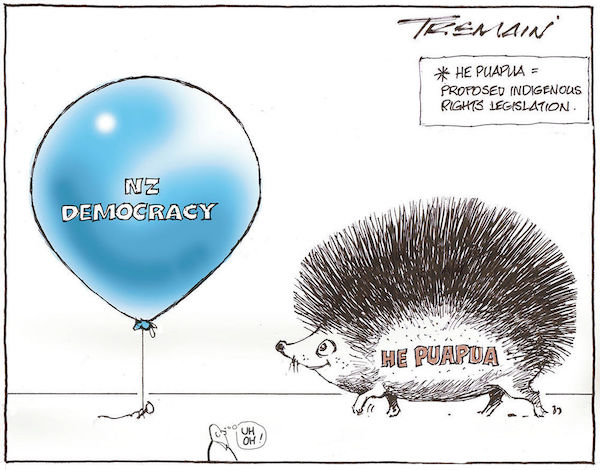 Plans are afoot to progressively disrupt our constitutional arrangements and replace our democracy with a revolutionary Treaty-based constitution giving a small group of New Zealanders, claiming to represent the 17 percent of the population with Māori heritage, 50 percent of the decision-making power, and control of the vast economic resources that would accompany such a role.

‘He Puapua - the Report of the Working Group on a Plan to Realise the UN Declaration on the Rights of Indigenous Peoples in Aotearoa/New Zealand’ - a document commissioned by Cabinet in 2019, was finally released in full last month, following an OIA request. He Puapua is a road map to implement the United Nation Declaration on the Rights of Indigenous Peoples. It proposes separate Māori authority across multiple layers of government and discusses constitutional change, such as a Māori Parliament. It also includes other just as radical proposals, among them:

He Puapua points out that considerable resourcing and capacity building will be required if Māori are to exercise governance power. The Crown’s main contribution will be resourcing, suggesting “there are multiple streams from which financial contributions might be sourced, including, for example, levies on resource use where Māori have a strong claim to ownership, such as water.”  (p.31)

For a clear idea of all that is being envisaged, we suggest you read the report. NZCPR has made it available to the public. Please click HERE.

It would be wrong to believe the scenario envisioned by He Puapua couldn’t happen in New Zealand. Many parts are already being implemented by the Government – for example, exempting some Māori land from rates, establishing Māori wards, giving Māori greater rights under the RMA, a new history curriculum, and the impending Māori Health Authority - with veto powers over decisions being made on behalf of the rest of us!

BUT WHAT CAN WE DO?

Opinion pieces well worth a read:

It has taken a while, but the National Party has finally responded to He Puapua. See NZ Herald coverage: National urges Government response on 'two systems' He Puapua report

RNZ: He Puapua report: Government has nothing to hide - Ardern

Go back to the May 2021 newsletter