Last call! Have your say on proposed ‘hate speech’ legislation 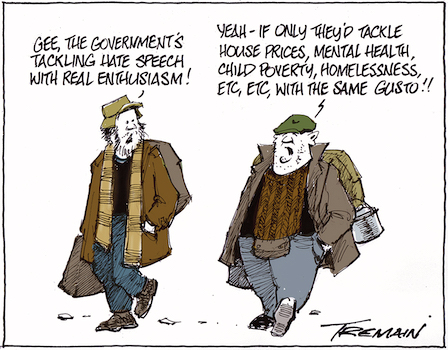 Since releasing its discussion document aimed at seeking opinions before the Government comes up with hate speech law changes, the proposals have been met with ‘don’t do it’ pleas from all sides of the political spectrum.

Common criticisms include that the definition of hate speech is very subjective and therefore open to abuse, and that the proposals put forward by the Government comprise a serious threat to our liberties and our democracy. As academics at Victoria University, Dr James Kierstead and Dr Michael Johnston, explain in Hate speech law a threat to democracy

“There is another value that is even more fundamental to democracy than equality, and perhaps even more difficult to maintain. That is the free expression of ideas, or ‘free speech’. This, we believe, is the bedrock of democracy. In a democracy, ideas and policies must always be contestable - and actually contested”.

“If the ability to say things that may offend is legally hindered, then the contest of ideas necessary to keep a democracy healthy is hindered as well.

A society that leaves it to politicians, the courts or - worse still - the police to determine which ideas may be expressed and which may not is no true democracy, whether or not it holds elections”.

The historical record, from the suffragettes to the civil rights movement to gay liberation, makes it clear: free speech has been a vital tool in the struggle of marginalised peoples to defend their rights. Being able to speak your mind without being fined or imprisoned should also be seen as a fundamental right of all citizens and is acknowledged as such in the Universal Declaration on Human Rights.

However, despite freedom of speech being one of the most precious and important human rights, this Government plans to replace the existing criminal provision in the Human Rights Act with a new criminal offense in the Crimes Act, and to greatly increase the penalties - from the current up to three months imprisonment or a fine of up to $7000 to up to three years' imprisonment or a fine of up to $50,000.

See Proposals against incitement of hatred and discrimination for a summary of the Government’s six proposals, which include four major changes.

Want to have your say?

The Free Speech Union (FSU) has made some very good arguments in opposition to the 'hate speech' proposals. You can read their submission here: Ministry of Justice Proposals to Reform the Legal Frameworks related to Hate Speech

FSU has also made it very easy for you to have your say, having drafted options that you can select to include in your submission. See: HAVE YOUR SAY BY MAKING A SUBMISSION TO THE MINISTRY OF JUSTICE ON THE PROPOSED HATE SPEECH LAWS

If you would prefer to do your own thing, you can make your submission through the Ministry’s Citizen Space website. You can find Citizen Space at https://consultations.justice.govt.nz This site provides an easy way to provide feedback on the proposals.

Or submit by email to [email protected]

Additionally, the Free Speech Union has launched a petition calling on the Government to stop their planned hate speech laws. You can sign HERE.

We also encourage you to share your views on the proposals with your local MP and any list MP who lives in your area.

RNZ: Hate speech laws translated from legalese: What you need to know by Russell Palmer

Newsroom: Why hate speech law is authoritarian by Ananish Chaudhuri

Go back to the August 2021 newsletter

Council Codes of Conduct - a tool for muzzling councillors?

Apr 06, 2022
Former Prime Minister Sir Bill English described Codes of Conduct as a threat to democracy a good 15 years ago, but we didn't heed his warning. Today they are being used by Councils as a tool to silence our elected representatives - blocking criticism by councillors. This is undermining the democratic process.  Codes of Conduct are designed to ensure the reputation of the Council is upheld within the community. They are not meant to be used as a means of preventing elected members from expressing their views. However, it appears this is happening to an alarming degree. Continue reading