Advancing the plan for a race-based constitution 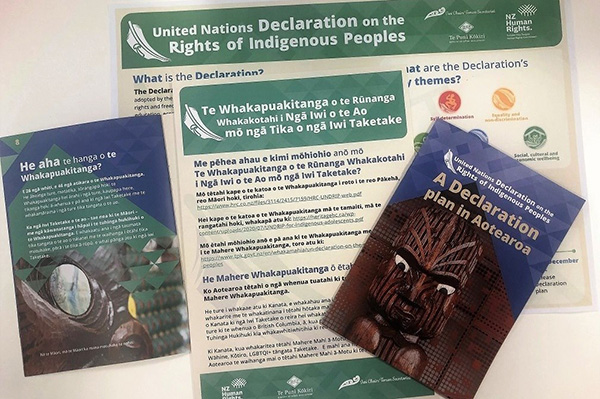 Legal academic Dr Claire Charters, lead author of He Puapua and part of the steering group working to produce a draft national plan to realise the UN Declaration on the Rights of Indigenous People is organising ‘The Constitutional Kōrero: Transforming New Zealand’s Constitution’ conference “to bring international thought-leaders on constitutions and Indigenous peoples together with Aotearoa-based thought-leaders to generate transformative, practical and robust options for constitutional transformation in Aotearoa”.

Under discussion will be options for “constitutional transformation to realise Māori rights in te Tiriti o Waitangi, He Whakaputanga and the UN Declaration on the Rights of Indigenous Peoples”.

This conference is to be held at the University of Auckland, 21-23 November 2022. It is open to anyone to attend. Learn more and register here: 2022 Constitutional Kōrero.

However, UNDRIP goes against our constitution and legal arrangements

Helen Clark's Labour Government rejected signing ‘The Declaration on the Rights of the Indigenous People’ in 2007 for very good reasons. The advice received from Crown Law Office was that four provisions were fundamentally incompatible with New Zealand’s constitutional and legal arrangements. However, former Prime Minister John Key ignored this advice and allowed it to be signed by Maori Party MP Pita Sharples in 2010.

In particular, she pointed to four provisions in the Declaration that were fundamentally incompatible with New Zealand’s democratic processes, legislation and constitutional arrangements, the Treaty of Waitangi, and the principle of governing for the good of all its citizens.

Ms Banks said that the provision on lands and resources could not be implemented in New Zealand. The provision, (article 26), stated that indigenous peoples have the right to own, use, develop or control lands and territories that they had traditionally owned, occupied or used. For New Zealand, the entire country is potentially caught within the scope of the article, which appears to require recognition of rights to lands now lawfully owned by other citizens, both indigenous and non-indigenous, and does not take into account the customs, traditions and land tenure systems of the indigenous peoples concerned. The article, furthermore, implies that indigenous peoples have rights that others do not have.

The entire country also appears to fall within the scope of article 28 on redress and compensation. The text generally takes no account of the fact that land might now be occupied or owned legitimately by others, or subject to numerous different or overlapping indigenous claims.

Additionally, articles 19 and 32 of the Declaration imply that indigenous peoples have a right of veto over a democratic legislature and national resource management. Ms Banks said she strongly supported the full and active engagement of indigenous peoples in democratic decision-making processes, and that New Zealand had some of the most extensive consultation mechanisms in the world.

But the provision in the Declaration implies different classes of citizenship, where indigenous peoples have a right to veto that other groups or individuals do not have.

The clauses that Rosemary Banks referred to are as follows:

States shall consult and cooperate in good faith with the indigenous peoples concerned through their own representative institutions in order to obtain their free, prior and informed consent before adopting and implementing legislative or administrative measures that may affect them.

The legality of the Key Government signing UNDRIP when it is “fundamentally incompatible with New Zealand’s constitutional and legal arrangements” has never been adequately addressed. Questioning this under the present government would go nowhere. However, there may be more joy in approaching the Ombudsman for his opinion on the matter. His contact details are here: https://www.ombudsman.parliament.nz/contact-ombudsman

Dame Suzanne Glazebrook: THE DECLARATION ON THE RIGHTS OF INDIGENOUS PEOPLES AND THE COURTS

Also see He Puapua on the Democracy Action campaigns page

Go back to the October 2022 newsletter