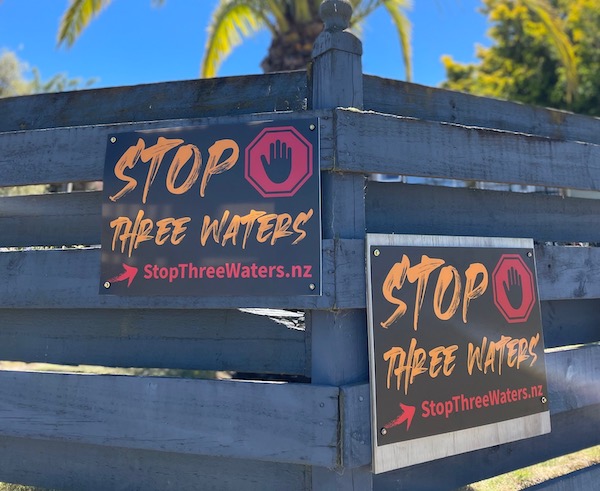 As the Government’s Three Water reforms enter their final stage, we are moving dangerously close to being marginalised in relation to the control of our ratepayer-owned water assets.

NEXT STEPS FOR GOVERNMENT

The final piece of the Three Waters reforms - the amalgamation of water services, infrastructure, and assets into four regional water services entities - has been delayed until March 2022. The Government says this will allow their Governance Working Group, made up of hand-picked local government and iwi representatives, to look at the reform plan. However, the group is severely constrained by the terms of reference as to what can be recommended.

The Government has released an Exposure Draft of the bill that will establish the water services entities. It is likely there will be some minor changes to this draft following the report from the Governance Working Group.

Late last year Democracy Action commissioned a comprehensive poll on the Three Waters reforms to better understand the public’s appetite for change and their desire to have a say before this significant plan is enacted. As you can see from the results below, the vast majority support a democratic process that includes public consultation.

We sent this report to all 858 Councillors around New Zealand, and to all 55 opposition MPs, and have received a lot of encouraging responses. There is no doubt that the Government’s lack of public consultation and predetermination of the outcome has angered many around the country.

So far 24 Councils have joined a new council advocacy group Communities 4 Local Democracy. The group was formed after all Councils were blindsided by Local Government NZ’s (LGNZ) cosy arrangement with the Government, which meant LGNZ could not act against the Government in relation to the Three Waters reforms.

‘Communities 4 Local Democracy’ is advocating for alternative models that retain water assets in local ownership, with local accountability. The group has commissioned Castalia, strategic advisors who work with governments on infrastructure, resource and policy challenges, to work with them on a new proposal for the delivery of water services and infrastructure.

Castalia recently issued a submission in response to MBIE’s request for feedback on the Economic Regulator set to be established as part of the reforms, something that the Councils say is only necessary as the public accountability mechanism under the proposed Water Services Entity design is highly complex, has unusual governance, accountability, and incentive structures.

THE PUBLIC ALSO STRIKES BACK - THE WATER USERS GROUP

A Water Users Group has been established, and is looking into issuing a legal challenge to the Government’s Three Waters reforms.

The group is asking the Court to make a series of declarations that the Minister of Local Government Nanaia Mahuta’s recommendations to Cabinet were based on errors of law and should be reconsidered. Issues to consider include:

Such a challenge implies that the Minister’s advice on governance arrangements, including co-governance in the Regional Representation Group and the role of Te Mana o te Wai statements, is wrong. See more at: What Three Waters will mean

TAXPAYERS UNION CONTINUES TO CAMPAIGN AGAINST THE LEGISLATION

Over 300 Stop Three Waters signs, such as pictured above, have been put up by locals around the country.

As it appears the Government is hell-bent on ramming these reforms through, we suggest you join in the conversation whenever you can, informing friends and family, writing to Mayors, Councillors and MPs, letting them know your views on this significant issue.