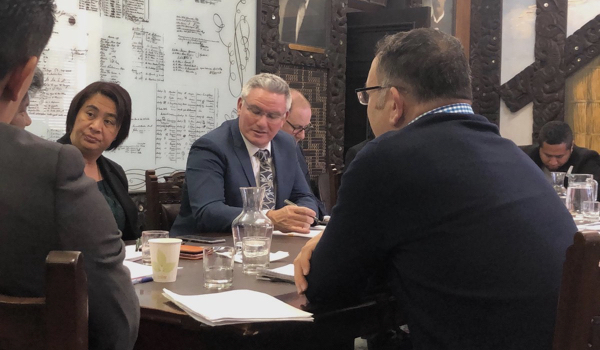 The Iwi Chairs Forum held its first hui of the year in the lead up to Waitangi Day. Tribal leaders welcomed the government's willingness to give Māori a greater say in the way the country is run.

Waikato-Tainui iwi leader Rahui Papa said the Crown-Māori portfolio could open up opportunities for more Māori input in government policy. “We think that Te Arawhiti*, the new Crown-Māori relations offices, there can be a whole new number of discussions about the inclusion of Māori into the policy making and policy decision making of the government”.

Mutu said: "The knowledge, the wisdom, the expertise and how to make things work is there amongst our people and what we are hearing is that is what the ministers want. They want us to take the lead on this, on how to fix up that relationship [we're] very happy to do that."

Fellow far north leader Haami Piripi of Te Rarawa said "Twenty years ago nobody knew anything about Te Tiriti o Waitangi. Now people are much more informed and anybody with common sense would realise that this is going to mean some sort of constitutional transformation for everyone."

Māori rights and interests in freshwater was another key topic. Waikato iwi chairwoman Rukumoana Schaafhausen believes that what the Treaty partnership means for Maori is direct engagement, so they are not just another stakeholder.

Far north iwi Ngāi Takoto rūnanga chairperson Wallace Rivers said "Our whole being is centred around fresh water. It is a large part of who we are and where we come from”.

"We want to be partners in the economic gains that come from fresh water and we are not there yet”.

*According to Minister Kelvin Davis, Te Arawhiti will support the Crown in being a better Treaty partner.

RNZ: Iwi leaders encouraged by government ahead of Waitangi

Such partnership arrangements have serious consequences for democracy. Retired District Court Judge and Canterbury University law lecturer Anthony Willy investigated the Treaty partnership issue for NZCPR, producing a paper, Sovereignty and the Treaty of Waitangi, in which he makes it very clear that there is no legal basis on which the Treaty confers any form of joint sovereignty on Maori.

Democracy whittled away, one relationship agreement at a time………

The Forum was established “to address issues and leverage opportunities relating to Maori”.

It is made up of the Mayor and Councillors of the Western Bay of Plenty District Council, and representatives of iwi and hapu that have interests within the territorial boundaries of the Council. The role of Chairperson and Deputy Chairperson alternates between Tauranga Moana and Te Arawa each meeting. The Chairpersons are invited to participate in the workshops of all Council Committees. “The workshops provide an opportunity to give Council direction on important matters”.

The Partnership Engagement Agreement Template November 2018, tabled at their meeting held on 17th December, seeks to provide a framework whereby the relevant iwi/hapū work as equal partners with the council on specific projects. Iwi and hapu can have a maximum of two representatives, and the Council a maximum of two representatives. In addition to technical, planning and policy capability, Council representatives will also possess the requisite skill and experience in Maori engagement or be respectful of the importance of engaging appropriately with Maori.

The project will be committed to respecting Te Ao Maori (Maori world view), with the expectation that their role as kaitiakitanga will be provided for, matauranga Maori will be valued, and tikanga and Te Reo Maori will be integrated where appropriate. Revealingly, the document also states that these agreements are not solely for cultural monitoring.

Developers engaging in their private projects are also encouraged to adopt the practices contained within the agreement.

In the Far North, a collective of iwi leaders have signed a formal agreement that will see greater Māori input in local government. At the signing of a governance relationship agreement between the Northland Mayoral Forum and Te Kahu o Taonui (Te Tai Tokerau Iwi Chairs Forum),

"It's a chance for us to have a voice in the legal proceedings at a regional level."

The agreement is supported by three of the councils in the North (Northland Regional, Far North, and Kaipara). There is uncertainty around Whangārei. "The mayor [of Whangārei, Sheryl Mai] is very receptive of the collaboration. However, to my knowledge, the problem lies with her councillors." Tau said.