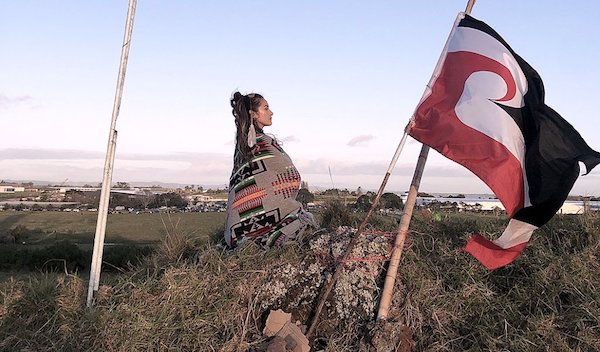 Yesterday (December 17) the Government announced that it had signed a deal with Fletchers to buy disputed land at Ihumātao for $30 million. At the same time Deputy Prime Minister Grant Robertson revealed that an agreement (He Pūmautanga) had also been signed between the Kīngitanga, the Crown and Auckland Council to decide on the future of the land. We find the implications of He Pūmautanga over the illegally occupied land at Ihumātao very alarming.

It is very disappointing to see no one in the mainstream media has bothered to analyse the terms the agreement, instead choosing to parrot what the Government is saying. By focusing on the $30M price tag, the use of the Land for Housing Programme and the line about the land not being a treaty settlement, they hope that we won’t look further and see the real damage they’ve done.

This agreement is badly written, full of flaws, and appears to have no consideration of anyone else who lives in this country outside those intimately involved in this fiasco.

We could have been well on the way to having 480 new homes built by now - homes we all know this country desperately needs. Instead, the Government has legitimised illegal actions, thumbed their nose at private property rights, and sent a signal to those who decide to disregard the legally binding Treaty settlement process.

Don’t worry about the $30M, that’s only the beginning.

Although we have not yet had the opportunity to run He Pūmautanga past a legal expert, the following is a preliminary analysis of the most concerning aspects in this Memorandum of Understanding. However, as these are personal views, we strongly suggest you form your own opinion by reading the document yourself. Click HERE for the link.

As far as we can tell from the document, the government has created a new fast-track land settlement process that skips the Treaty of Waitangi Act 1975 and it’s restrictive “no private land” rule altogether, allows for a new Crown/ Māori governance structure with the Kiingitanga at the centre, removes the need for any public consultation, and although the taxpayer foots the bill now and into the future, the benefits flow back to Māori.

It is only a seven-page document, but it packs one hell of a punch, with huge implications for this country. Here is our analysis of a selection of clauses:

Comment: This explicitly states for the benefit of the occupiers. The addition of “the people of Tamaki Makaurau / Aotearoa” appears to be an afterthought designed to combat negative public reaction. You only need to look at the Tūpuna Maunga Authority to see how limp that statement is in practice.

Comment: The document claims this is not a Treaty settlement. (Possibly another sop designed to appease the public). The big danger here is that this deal legitimises an alternative form of “settlement”, one that is outside the usual process of Treaty settlements.


Analysis/comment: A formal relationship will be set up between the occupiers (who they are is yet to be fully determined), and the Crown with the Kīngitanga acting as a mediator. The purpose of the group is to provide positive outcomes for the occupiers. Oh, and for Aotearoa. (Experience tells us this is code for “what’s good for Māori is good for all New Zealanders”).

It also hints that some agreements have already been made, but more on that later.


Comment: The crown is buying the land under the Land for Housing Programme, but with the understanding it might not ever be used for housing. This contradicts the purpose of the programme.

Comment: While the new governing group is working out what to do with the land, the taxpayer foots the bill for the upkeep of the land. One could assume this includes any “protection” and “enhancement” the group decides on (see below).

Comment: We note the implications of the Kīngitanga role as the arbitrator. Please read further for more on this.

Comment: A couple of critical points that need clarification:

Note that the Crown has bought the land, yet the Crown is to have only two representatives out of six positions on the steering group.

Comment: Hold on. The future use of the land “may include housing...”. Surely land purchased under the Land for Housing Programme is required to be used for housing.

Comment: Will this go down the zero-investment self-funded acquisition route? Will the Crown help to fund the development of the land, with the profits going to the occupiers, which could be used by the occupiers to fund their eventual purchase of the land? Don’t think this scenario can’t happen - see the Ngāti Toa deal in Porirua.

Comment: Does this open the way for the Crown to pay all the Kīngitanga costs relating to He Puumautanga?


Comment: Basically, it’s the te ao way or the highway.


Comment: If we can’t agree on what to say to the public, we just won’t bother.