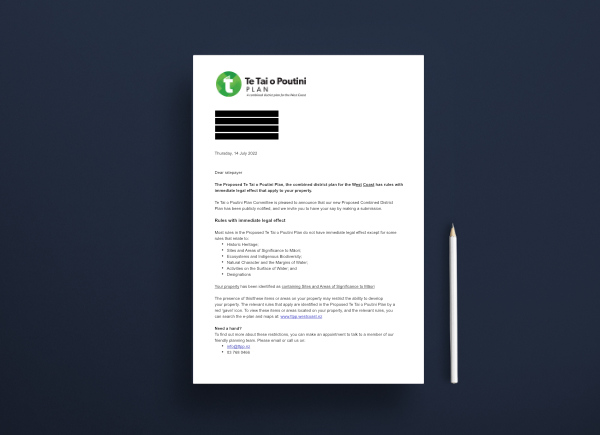 West Coast landowners from Karamea to Haast are shocked and angry after receiving letters from the Te Tai o Poutini plan committee chair out of the blue, informing them of new legal planning rules affecting their land. Letters to 1500 property owners reveal that the new rules have immediate effect. Both urban and rural properties are impacted.

This bombshell announcement was revealed for the first time in when the Te Tai o Poutini Plan, (the West Coast’s proposed district plan), was released for public consultation on 14 July.

The rules that have an immediate effect concern the sites of historic heritage, areas of significance to Māori, ecosystems and indigenous biodiversity, natural character and margins of water, activities on the surface of water, and designations.

The notification of 216 Sites and Areas of Significance to Māori (SASMs) throughout the West Coast area come as a complete surprise to many landowners, some who have farmed their properties for generations with no idea are they have been hosting sites or areas of significance to Māori all this time. But, despite a lack of prior consultation with the affected landowners, these SASMs come with new restrictions that are effective immediately.

The restrictions are said to enable Ngāi Tahu to exercise its obligations over land with which it has “significant cultural, spiritual, historic and traditional associations”.

Click HERE for the list of ‘Sites and Areas of Significance to Māori’ referred to in the Plan.

Rex Williams, Chair of the committee who wrote the plan, promised landowners the designations will have “little effect”, saying:

“To progress activities on the site, landowners will mostly require only a letter of authority from iwi.”

However, it appears this claim is somewhat naïve - the comprehensive list of new rules applying to SASM areas suggest otherwise.

Rural lobby Groundswell describes provisions in the new plan - including the yet to be finalised Significant Natural Area (SNA) identification - as a "land grab” and calls for the plan to be immediately withdrawn. West Coast Regional Council chairperson and Te Tai o Poutini Plan (TTPP) committee member Allan Birchfield said he agreed with Groundswell, as the plan was "an attack on private property rights and democracy".

"I'm getting a lot of calls over the Māori sites of significance on (ratepayers') land.

The plan should be withdrawn and we take a bit more time with it.

They say it's a draft but if you look at it, it actually comes into effect. It has immediate effect, a lot of it."

Allan Birchfield was the sole plan committee member who voted against its formal notification.

Anyone wishing to understand the implications for their property is in for a frustrating time. Firstly, go to the plan map, open the map tools menu, and select the correct layers from a series of menus and sub-menus. The site is slow to respond, but when the areas do appear, it is difficult to see where the areas start and end, and exactly where the property boundaries that they fall in. Once you have worked out the number allocated to the area in question, then open another tab to find the corresponding number in the plan book. The book lists the codes of the rules that apply to that area, which are explained in another chapter of the book. It is a slow, cumbersome, and confusing task.

Do you want to have your say on the West Coast’s proposed district plan?

The proposed Te Tai o Poutini Plan (TTPP) is now open for submissions. The formal consultation period includes a raft of public meetings in August to enable ratepayers and the public to make written submissions.

Please click HERE to read the TTPP public notice to inform your submission.

Click here to see how to make a submission

Stuff: 'What the hell is going on': Landowners surprised by letters claiming their land has 'significance'

Stuff: New ‘one plan’ for West Coast to be released for public feedback

Go back to the August 2022 newsletter