‘Reinvigorating Democracy’ – does this include the restoration of democracy in local government? 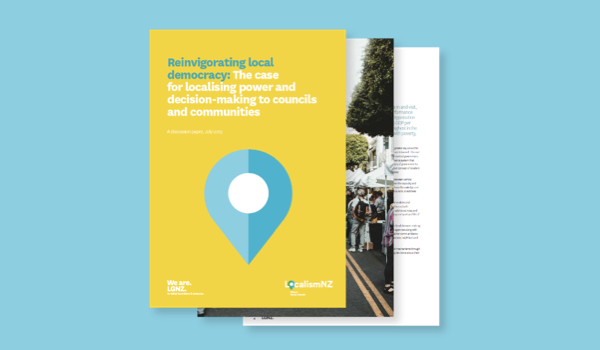 Over 600 local and central government delegates were on hand at the opening of the Local Government New Zealand (LGNZ) Conference in Wellington on July 7th to hear the president of LGNZ, Dave Cull, launch a push for greater localism in his speech ‘Reinvigorating Democracy: The case for localising power and decision making to councils and communities’.

Essentially, LGNZ is calling for a shift in the way public decisions are made by seeking commitment to a programme of devolution and decentralisation - saying instead of relying on central government to decide what is good for our communities, that councils and communities be empowered to make such decisions themselves.

In his speech Dave Cull blames the country's colonial history for an over-centralisation of power, saying: “Historically, government in New Zealand has been local. Before Europeans arrived in New Zealand, power and authority resided with whanau, hapu and Iwi, and it was only with colonisation that government at a national level became a reality”.

In a recent article Point of Order called instead for the restoration of democracy in local government:

“But it’s not clear from the speech notes whether Cull was talking about democratic structures and the concept of eligible citizens being entitled to cast one vote each at local government elections to choose their council representatives and hold them accountable”.

“Many of the 600 delegates will have been party to council decisions – without reference to their citizens – to arrange for iwi representatives to sit on council committees without the hassle of having to campaign for electoral support”.

Read the full article here: Forget about invigoration – LGNZ should aim to restore the democracy its members have debased

LGNZ has produced a discussion paper which sets a proposed framework by which decision making can be handed back to communities, available by clicking HERE. We, the general public, have been invited to critique their ideas, come up with our own, and start a wider debate about where decisions on important matters should be made in New Zealand. Please click HERE to find out how to have your say. Feedback due by 15 December 2019.

LGNZ has lost the plot!

Nov 06, 2022
Local Government New Zealand (LGNZ), an organisation that purportedly represents the interests of local authorities (and by extension local communities), appears to have changed its prime allegiance from local authorities to central government. Continue reading

Last chance to have your say on ‘Reinvigorating Local Democracy’